Designer Helene Rother Gets Her Due as Hall of Fame Inductee

In addition to the new members, TomTom co-founder and CEO Harold Goddijn was named the inaugural winner of AHF’s new Mobility Innovator Award.

To be sure, the group’s collective accomplishments are extraordinary and their inductions well deserved. Check out AHF’s individual tributes to Chung, Gallagher, Goddijn and Leno.

A Class of Her Own

However, Rother’s story is the most intriguing. 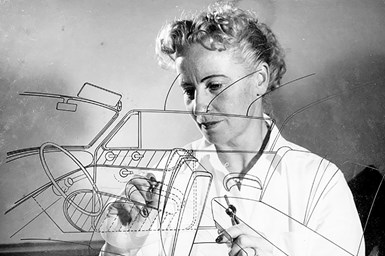 She’s credited with being one of the first female designers in the auto industry, starting as an interior stylist with General Motors in 1942. She went on to open her own studio and won several awards, including the prestigious Jackson Medal.

But we’re getting ahead of ourselves.

Rother began her career in the Parisian fashion industry, enjoying early success designing high-end jewelry, watches and hat pins. But she was forced to flee France, with a young daughter in tow, during World War II.

After living in a refugee camp for several months in North Africa, the pair made their way to New York in 1941. There the enterprising single mother landed a job as an illustrator for Timely Publications (later to become Marvel Comics), where she penned the character “Jimmy Jupiter,” who could transport himself to an adventure-filled parallel universe.

Rother’s automotive adventures began when she responded to an ad GM posted in the New York Times. Needless to say, she got the job—without any automotive or industrial design experience—and moved to Detroit.

Although she worked at the automaker for only four years, Rother was a quick study and soon became the design leader for upholstery, lighting and interior hardware. Her $600 per month salary, which was considerably higher than many of her male counterparts, is a testament to Rother’s talents.

By 1947, Rother had opened her own studio. Her client list included Magnavox, ambulance and hearse maker Miller-Meteor, and tiremakers Goodyear and B.F. Goodrich.

But she is best known for her work with Nash Motors. Rother’s stylish interior designs helped reposition the company as an aspirational brand, epitomized by the 1951 Rambler compact car.

Nash put her on par with famed Italian design house Pininfarina. Sales brochures for the Rambler boasted of: "Styling by Pininfarina and interiors by Madame Helene Rother of Paris."

The rest of the auto world took notice. In 1951, Rother became the first woman to address an SAE conference, which she followed up with a paper provocatively titled "Are we doing a good job in our car interiors."

Rother, who died in 1999 at the age of 91, championed interior design throughout her life. She argued that the interior of a vehicle was just as important as the exterior styling.

Such a radical concept was way ahead of its time. Thankfully, her forward thinking now is being immortalized by the Hall of Fame.

She was a true pioneer with a larger-than-life personality, which her daughter Ina describes in a video posted by the Nash Car Club of America.