France’s Plastic Omnium SA is reorganizing its management team to bring in younger leaders to help prepare the company for long-term growth. 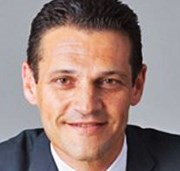 Favre (pictured) will succeed co-CEOs Laurent Burelle—whose family founded the company in 1946—and Jean-Michel Szczerba. Burelle will remain chairman and CEO of Burelle SA, the holding company that owns a majority stake in Plastic Omnium.

Szczerba, who has had a 34-year career at Burelle, will serve as an advisor to the company. Paul Henry Lemarie is leaving his position as chief operating officer after 39 years with Plastic Omnium, but he will continue as a director and COO of the holding company.

Burelle's daughter Felicie, 40, will become managing director of Plastic Omnium on Jan 1. She started her career at Plastic Omnium in Spain, then spent five years at EY consulting. Felicie returned to the family business in 2015 and has been senior executive vice president since January 2018.