Volvo’s Polestar electric vehicle unit is launching the production of an all-new compact sedan in China as manufacturing in the country slowly ramps up after shutdowns due to the coronavirus.

Earlier this week, Volvo said that it had resumed operations at all of its manufacturing facilities in China. 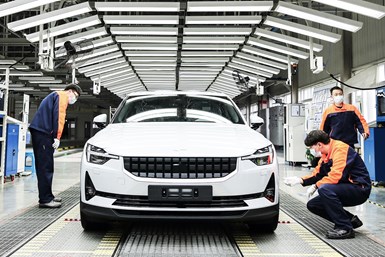 Production of the Polestar 2 EV ramps up in China following the outbreak of the coronavirus. (Image: Polestar)

The Polestar 2 is built at the carmaker’s Luqiao factory on the same production line as the Volvo XC40 crossover, which was launched last April. The plant is located in the eastern province of Zhejiang, where parent Geely Auto is based. Geely acquired Volvo in 2010 and added Lotus in 2017.

Crediting “huge efforts” from the manufacturing staff and supply chain team, Polestar says none of its workers in China have tested positive for COVID-19, the disease caused by the coronavirus. Ongoing precautions include: 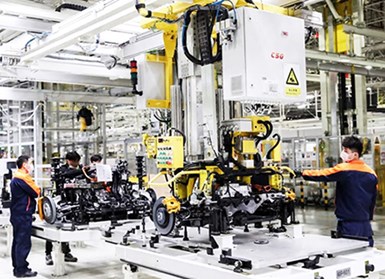 “The world is facing enormous upheaval in the face of the coronavirus pandemic,” notes Polestar CEO Thomas Ingenlath. “We start production now under these challenging circumstances with a strong focus on the health and safety of our people.”

Built on Volvo’s Compact Modular Architecture, the Polestar 2 features a sporty fastback design with a large glass roof. Power comes from a pair of electric motors that generate a combined 408 hp and 487 lb-ft of torque.

The car’s 78-kWh battery provides an estimated driving range of 292 miles on the European WLTP cycle.

Polestar says the new model is the first vehicle in the world equipped with Google’s next-generation Android infotainment operating system. The embedded technology enables direct in-car access to Google Maps, a voice-activated assistant and other services without the need for a smartphone to be present or the use of an Android Auto interface.

First-year production will be limited to a top-end Launch Edition variant that starts at $63,000. The standard $55,000 Polestar 2 will be added in 2021, followed later by a less-expensive, single-motor version. Buyers also can opt to lease the vehicle via a short-term subscription plan.

Deliveries are due to start this summer in Europe, followed shortly thereafter in China and eventually North America. Customers can complete the buying process entirely online.

Small showrooms, dubbed “Polestar Spaces,” also are in the works. The facilities will allow prospective customers to interact with product experts and schedule test drives.