Porsche AG is adding four cities in North America to the vehicle subscription service pilot program it launched two years ago in Atlanta. 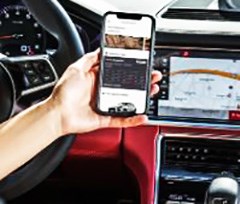 The Passport and Drive services are now also available in Las Vegas, Phoenix, San Diego and Toronto. The programs are being moved to the control of local dealerships—who will interact directly with customers and coordinate vehicle deliveries—instead of through Porsche itself.

The scheme enables a customer to pay a single fee that covers insurance, routine maintenance and access to as many as 20 models that are delivered as requested. The all-new Taycan electric sports car will be added to the program next year.

The main Porsche Passport plan requires a $600 activation fee. Customers then pay $2,100 or $3,100 per month for access to eight or 20 models that are delivered as needed. Porsche says members trade in their cars an average 2.5 times per month.

Porsche Drive allows users to rent vehicles on an hourly, daily or weekly basis. Prices start at $269 for the four-hour minimum use of a Macan crossover vehicle or Boxster or 718 Cayman sports car. The top-end 911 costs $2,900 per week.

Porsche says the bulk of participants during the Atlanta pilot program are new to the brand. The average age of members also was about eight years younger than a typical Porsche owner.

Carmakers and dealerships have been testing subscription plans for several years with varying levels of success. General Motors dropped its Book by Cadillac program last December and Volvo’s subscription plan is being challenged by a California dealer group.