Porsche AG is bringing back the Turbo version of its Macan sports car after dropping the package from its 2019 lineup.
#Porsche #HP #Carbon

Porsche AG is bringing back the Turbo version of its Macan sports car after dropping the package from its 2019 lineup. 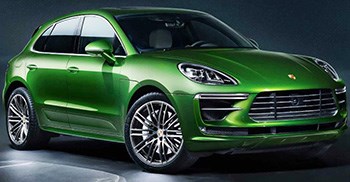 The 2020 sedan is powered by a twin-turbocharged 2.9-liter V-6 engine, which also is used in performance variants of Cayenne and Panamera.

Mated to a 7-speed dual-clutch transmission and optional Sport Chrono package, the new engine propels the Macan Turbo from zero to 60 mph in 4.3 seconds and a top speed of 168 mph. Both are slight improvements.

A more powerful Turbo Performance Package is expected to be added later. In the 2018 model, the 3.6-liter engine with the package kicked out 440 hp and was slightly faster off the line.

Other goodies include adaptive dampers and a tungsten-carbide brake coating that Porsche says increases responsiveness, reduces dust and cuts wear. Among the available options are an adjustable air suspension with rolling pistons and new shock absorber hydraulics, torque vectoring and carbon-ceramic brakes.