Want to plan the perfect road trip? Hint: It probably won’t be the fastest way to reach a destination, but it will be the most exhilarating and/or scenic route. 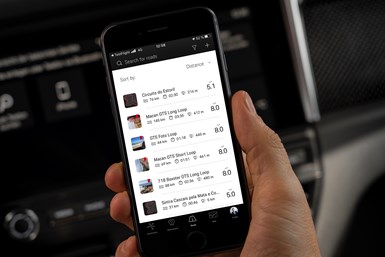 Porsche launched its “Roads” app last year to help drivers find such motoring nirvanas—no matter where they are in the world—based on published reports and member ratings.

Now it’s making several enhancements that allow users to better share the experience and ensure the environment outside the vehicle matches what they’re feeling from behind the wheel.

The More, the Merrier

Launched last year, the free app has more than 100,000 community members in some 60 countries.

A new “tours” feature allows users to connect with other drivers—regardless of what make or model vehicle they own—and coordinate group trips. Members also can showcase their rides via the app’s virtual garage and share driving-related memories with each other.

"Roads is about creating more passion for driving, whether in a Porsche or any other vehicle,” says Marco Brinkmann, creator of the platform in Porsche's digital marketing department.

Porsche also is teaming with Boston-based startup ClimaCell on a new feature that provides drivers with detailed information on the air quality along a selected route.

This will allow drivers to pick the best places to stop along the way or even whether it’s safe to drive with the windows open or convertible top down, Porsche says. Drivers also could choose alternative routes based on the information.

Formed in 2016, ClimaCell says it uses information from hundreds of millions of sensors worldwide—including cellular and wireless networks, internet-of-things devices and traditional weather databases—to analyze the weather and air quality. This allows it to precisely report and forecast “hyper-local and hyper-accurate” conditions within a 500 m (164 ft) radius on a minute-by-minute basis, ClimaCell claims.

In Porsche’s Roads application, air quality information is conveyed to drivers via a color-coded traffic light icon. Green means it’s safe, while yellow denotes caution and red suggests you probably should continue down the road before stopping for a picnic.

The companies are creating a proof-of-concept with predictive data about upcoming road conditions based on real-time weather tracking. This can alert drivers to potential dangers, such as slippery roads around the next corner.

Porsche aims to eventually integrate the information directly into vehicle control systems, including active suspensions. The system would build on the Wet Mode feature Porsche launched in 2018 that uses sensors mounted in a car’s wheel arch to detect road conditions, then automatically adjust the suspension, rear spoiler and throttle accordingly.