Porsche AG took the wraps off the production version of its first all-electric vehicle, the Taycan sport sedan, today at events in China, Germany and Canada.
#BMW #Porsche #MercedesBenz 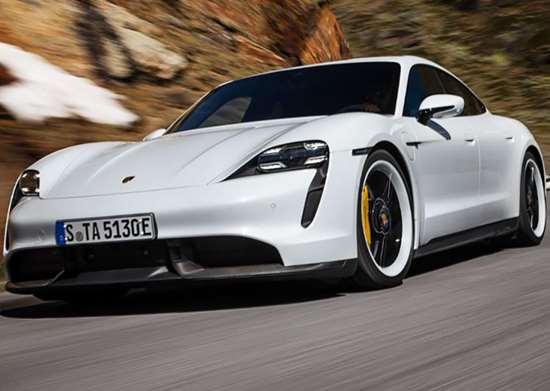 Porsche AG took the wraps off the production version of its first all-electric vehicle, the Taycan sport sedan, today at events in China, Germany and Canada. 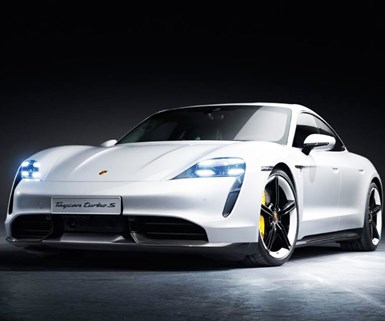 Dealer deliveries of the first two Taycan variants are due to start later this year. The company says it already has taken 30,000 reservations for the car.

Pricing of the Taycan Turbo will start at $152,000 (before destination fees) in the U.S., while the more powerful Turbo S model will retail for about $186,000. Lower- and higher-end versions will follow in coming years.

Neither version is turbocharged in the traditional sense, because neither has a piston engine. Porsche is using the term “turbo” to because the two models have an “overboost” feature that temporarily increases power. 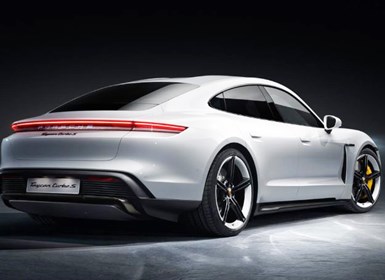 The overboost feature increases output to 670 hp in the Taycan Turbo and to as much as 750 hp in the Turbo S. The added oomph propels the vehicles from zero to 60 mph in 3 seconds and 2.6 seconds, respectively. Top speed for all variants is 161 mph.

Porsche says the key to the Taycan’s performance is the use of permanent synchronous motors rather than cheaper but larger and less efficient asynchronous motors. The company also touts thermal management and packaging benefits of the pricier motors.

The battery features an industry-first 800-volt architecture, which is twice the capacity of most EVs. Porsche says this will enable the battery to be replenished from 5% to 80% in 23 minutes with a 350-kW, 800-volt charging station. The carmaker is in the process of installing 500 of the fast chargers across the U.S., including at all of its dealerships. 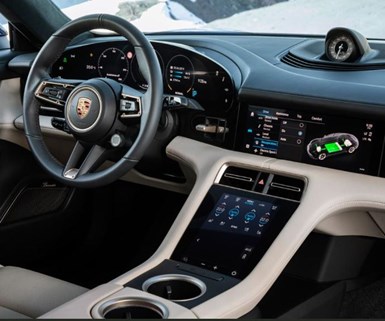 The four-door Taycan rides on Porsche's new J1-platform, which will be shared with the upcoming Audi e-tron GT sedan. The car is about the same size as a BMW 5 Series, Mercedes-Benz E-Class or Tesla Model S. Styling is nearly identical to the Mission E concept the carmaker unveiled nearly four years ago.

The Taycan’s 5,100-lb mass is distributed nearly evenly between the front and rear axles, with a slight rear bias at 51%. Porsche says the Taycan has a lower center of gravity than any of its current models. The car also boasts a Porsche-best drag coefficient of 0.22.

The Turbo and Turbo S get a standard three-chamber air suspension derived from the Porsche Panamera sedan. Other goodies include an electronic limited-slip differential, all-wheel steering and optional dynamic chassis control that helps reduce body roll, oversteer and understeer.

The Taycan's brakes, which feature 10-piston calipers in the front with four-piston units in the rear, are tuned to maximize power regeneration. Porsche claims as much as 90% of braking can be done electronically without engaging the mechanical system.

The EV’s throttle response is five times quicker than for a comparable piston engine car, according to Porsche. Traction control is said to be 10 times faster and torque vectoring five times faster. Five driving modes are available, including ones that maximize performance or range.

The interior is highlighted by three large displays, including a fully digital floating gauge cluster. A separate display for the front seat passenger is optional.

Owners also can opt for a leather-free interior that includes components made from recycled materials. The front and rear trunks have 2.8- and 12.9-cu-ft of storage capacity, respectively.