The Evija is Lotus’ first all-new model in more than a decade. The new EV is said to be the most dynamically accomplished road car in the history of Lotus.
#Lotus #HP #Carbon

Got an extra $2 million-plus lying around, some spare time (who doesn’t these days), a passion for really fast cars and a flair for design? 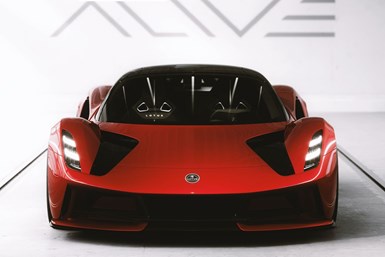 If so, Lotus has the car for you. It’s called the Evija (pronounced E-vi-ya) and is powered by four electric motors that produce 1,973 hp and 1,254 lb-ft of torque, which would make it the most powerful production car in the world.

Production is due to start later this year at Lotus’ main complex in Hethel, England. Pricing starts at £1.7 million ($2.2 million) before taxes and other fees.

Prospective buyers who pony up a refundable £250,000 ($313,000) deposit get to customize their rides, thanks to a special configuration tool. 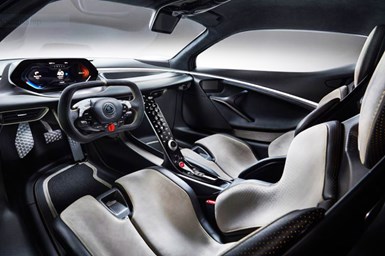 The touchscreen system uses an imaging technique called “ray tracing,” which is said to be much more advanced than those used by other carmakers. Featuring a high-powered graphics processor and software used in the gaming industry, the configurator renders life-like, high-definition images and animations, according to Lotus.

Users can view the Evija from every angle, inside and out, as well as place the car into various environments around the world to see exactly how it would look in localized sunlight. The piece de resistance is a personalized 360-degree fly-through video that looks like it was shot with a drone.

To keep buyers happy until their Evija is built and delivered, Lotus plans to send them periodic gifts (possibly including a cool scale model?). The unique presents will reflect the car’s technology and exclusivity, according to the carmaker.

The final gift will be a personalized book that show’s a customer’s car at different stages of the hand-built production process.

Constructed from a carbon fiber chassis and body, the Evija measures 181 inches long, 79 inches wide and just 44 inches tall with a minuscule 4-inch ride height. In short (pun intended), the car is low and broad. 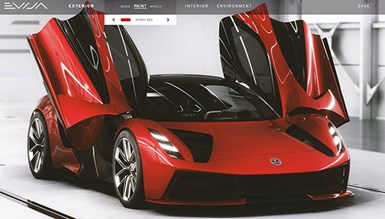 Tipping the scales at 1,680 kg (3,700 lbs), the Evija will be the heaviest Lotus ever. But, the company notes, this is considerably lighter than other electric hypercars.

The carmaker also claims the new EV will “set a new standard for Lotus driving performance” and be “the most dynamically accomplished road car in the history of Lotus.”

The four electric motors will provide all-wheel drive and torque vectoring. Lotus notes that if the 1,973 hp is distributed evenly, each wheel on its own would be more powerful than any single car it has produced.

The power pack will propel the Evija from zero to 60 mph in well under 3 seconds and hit 186 mph in less than 9 seconds, with a top speed of more than 200 mph, according to Lotus.

The car’s 70-kWh battery provides an estimated driving range of 250 miles on the WLTP cycle. The battery can be charged to 80% capacity within 18 minutes using a 350-kW DC.

The Evija is Lotus’ first all-new model in more than a decade and the first launched since the British marque was acquired by China’s Geely Auto in 2017.

Production is limited to 130 units, and the first year’s output is already spoken for.