IIHS says elevated or protected bike lanes over bridges are significantly safer than no lanes. But at street level, cyclists in otherwise protected lanes are constantly exposed to the dangers of cross streets, alleys, driveways and pedestrians. 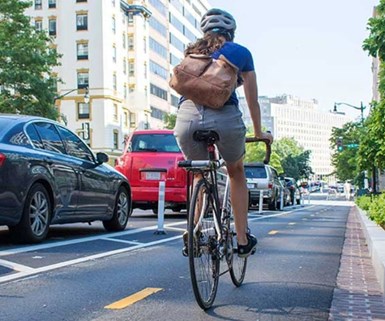 IIHS points out that other research confirms that crashes may be less severe in areas where cycle paths are separated from through traffic by a curb, landscaping, posts or parked cars.

The institute’s analysis is based on field work by George Washington University, Oregon Health and Science University and New York University.

IIHS notes most fatal bike crashes occur midblock when cyclists are sharing the roadway with vehicular traffic. With protected bike lanes, most crashes occur at intersections but are at lower speeds and less likely to cause serious injury.

Even so, the institute says conventional unshielded bike lanes on local roads have the lowest crash risk of all options. It theorizes that’s because protected bike lanes are often installed on busier roads that present an inherently higher risk to cyclists.