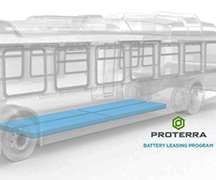 Under the scheme, customers lease batteries separately from the purchase of the bus. This lowers upfront costs to make the price of an electric bus comparable to that of a diesel- or CNG-powered model, according to Proterra.

To help decrease risk, the busmaker guarantees the performance of the batteries through the expected 12-year life of a bus. The battery pack is replaced at no additional charge after six years.

Proterra and Mitsui also have created a program to use leased batteries in secondary applications after the end of their useful life in a vehicle. Separately, Proterra also has started a leasing program for electric buses to further reduce monthly payments.

Battery leasing programs were authorized in the U.S. under the 2015 Fixing America’s Surface Transportation Act.