When the program was announced in early 2018, some purists balked when Ford said it was considering using its iconic Mach 1 name for the upcoming Mustang-inspired electric crossover. In fact, the initial response gave Ford reason to pause about the strategy. 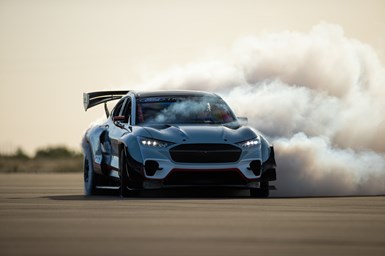 But the carmaker put such concerns to rest last November when it unveiled the Mustang Mach-E, including a 459-hp GT model.

That’s three times as much as the Mach-E GT and more than four times that of the base Mustang crossover. It puts the Mach-E 1400 on par with pricey hypercars such as the 16-cylinder Bugatti Chiron and hybrid Koenigsegg Regera, which are two of the fastest production cars on the planet.

That’s the point of Mach-E 14000. In developing the one-off vehicle, Ford says it wanted to demonstrate the performance potential of electric propulsion. Mission accomplished.

The Mach-E 1400 is fitted with seven electric motors (three in the front and four in the rear), with a single driveshaft connecting them to the two differentials. Power can be split evenly between front and rear, or completely to one or the other.

Ford says the design allows it to test different layouts and their effects on energy consumption and performance, including rear-, front- and all-wheel drive configurations. The system also can be optimized for different performance applications, such as the drag strip, road racing or drifting competitions. Drifting, for example, requires a hydraulic handbrake to initiate such maneuvers and control arms and steering changes to allow for extreme steering angles.

Ford partnered with RTR Vehicles, a tuning shop founded by race driver Vaughn Gittin, on the prototype using a Mustang Mach-E GT body-in-white as its basis. The companies spent a combined 10,000 man-hours on the project.

The electric motors are paired with a 56.8-kWh battery made of nickel manganese cobalt pouch cells. Ford says the battery system can be cooled during charging using a di-electric coolant to help speed up the process.

Other features include a:

In addition, Ford says the prototype is a test bed for new materials. One example: The hood is made of organic composite fibers rather than conventional carbon fiber.

Ford plans to introduce the Mach-E 1400 prototype at an upcoming NASCAR race.

There are no production plans. But Ford says the vehicle could provide the basis for a future race car. The company also plans to race its new Cobra Jet 1400 EV, which it unveiled earlier this year.

Until then, it plans to plug in and test the limits of the high-performance model and build the excitement until the all-new Mustang crossover bows later this year.