Many called him the greatest driver to never win an F1 championship. Others dropped the last part.
#racing #europe #people

Stirling Moss, one of the all-time great race drivers, died Sunday at his home in London following a long illness. He was 90. 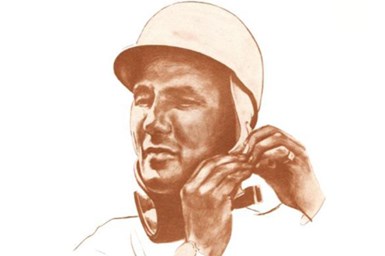 Tributes from around the world immediately poured in to honor the British icon, who was known as "Mr. Motor Racing.”

McLaren succinctly summed up Sir Stirling (he was knighted in 1999) on Twitter this way: “A prodigious competitor, supremely talented racer, and consummate gentleman, he leaves an indelible mark of greatness on the history of international motorsport.”

Champ Without the Title

Moss was an inaugural inductee into the International Motorsports Hall of Fame when the organization was formed in 1990. Topping his racing resume are 16 wins in the 66 Formula One events he entered.

Despite all of his success, one achievement eluded Moss: an F1 season championship. He finished second in the drivers' title four straight years (1955-1958) and third three other times, which led many to describe him as the greatest F1 driver never to win the world championship. Others dropped the last part and simply called him the greatest. Period.

Moss was born into a racing family. His father, Alfred, drove in the Indianapolis 500, and his mother, Aileen, was an English women's champion. His sister, Pat Moss Carlsson, also was a successful driver, competing on the rally circuit.

Following in his parents’ footsteps, Stirling created a makeshift track on his family farm, where he raced a dilapidated 7-hp Austin—when he was 10. When he turned 18 in 1948, Moss bought into a Cooper 500 racing car and won 11 of the first 15 races he entered.

International success soon followed, including the grueling Mille Miglia in 1955. Moss beat Argentine great Juan Manuel Fangio by nearly half an hour in the 1,000-mile road race through Italy.

In 1957, Moss set the world land speed record on the Utah Salt Flats.

A year later, he won four F1 races. But his sportsmanship cost him the season championship. Moss vouched for Ferrari’s Mike Hawthorn, saving his rival from being disqualified in the Portuguese Grand Prix, the third-to-last race of the season. The resulting six points Hawthorn earned helped push him past Moss to take the title by a single point.

Known as one of the most knowledgeable, passionate and fearless drivers in the sport, Moss competed in as many as 62 races per year.

But his aggressive driving style also resulted in several spectacular crashes. In a 1960 accident, Moss broke both legs and damaged his spine. Five months later he won the U.S. Grand Prix in Riverside, Calif.

In 1962, Moss smashed into an embankment at 100 mph during an event in Goodwood, England. It took 45 minutes to cut him free.

The crash left Moss in a coma for a month and partially paralyzed for six. After a brief attempt at a comeback, Moss ended his professional career at age 33.

One of a Kind

He went on to become a successful real estate developer, inventor and motorsports consultant. Moss eventually returned to his true passion, competing in various amateur races and became a fixture on the historic tour, before hanging up his helmet for good in 2011 at 81. 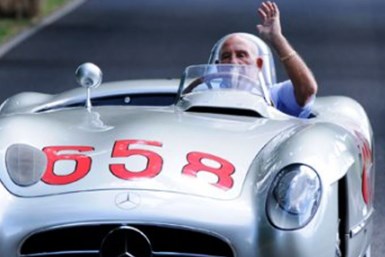 For most of his life, Moss seemed to be indestructible. A year before he re-retired from racing, Moss broke both ankles and hurt his back in a fall three floors down an elevator shaft.

Then in late 2016, Moss suffered a serious chest infection while on a cruise in Singapore and was hospitalized for four months before he could return home. Soon thereafter, Moss retired from public life.

In the end, his wife Susan told the Associated Press, “It was one lap too many.” But he will never be forgotten.

For years, the first thing British policemen asked after pulling over a speeding driver was: “Who do you think you are, Stirling Moss?”

In their dreams. There can only be one Mr. Motor Racing.