It’s the fastest. Most powerful. The Ram 1500 TRX is all truck from top to bottom.
#tech #HP #Ford

Fiat Chrysler clearly had the Ford F-150 Raptor in its sights when it unveiled the concept Ram 1500 TRX off-road pickup in 2016. 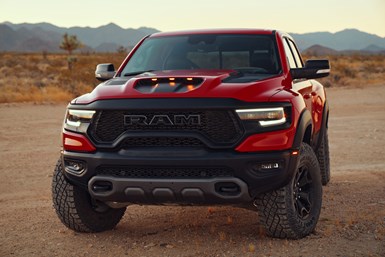 FCA claims the 2021 TRX will be the fastest, most powerful and most technologically advanced fullsize pickup ever.

To drive the point home, the carmaker calls the rugged off-roader the “apex predator” of the truck world…as in top of the food chain...king of the jungle...Raptor “destroyer.”

The TRX’s performance credentials live up to the hype.

Powered by FCA’s supercharged 5.7-liter Hellcat V-8 engine and an 8-speed automatic transmission, the pickup generates 702 hp and 650 lb-ft of torque. The vehicle can zip from zero to 60 mph in 4.5 seconds (when Launch Mode is activated) and takes 12.9 seconds to cover a quarter mile on its way to a top speed of 118 mph (100 mph-plus over rugged terrain). 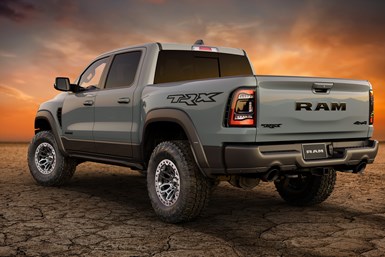 Measuring 233 inches long, 145 inches wide and 81 inches tall, the TRX is slightly larger than the Raptor in every dimension. The latter weighs 5,525 lbs in its crew cab configuration (FCA hasn’t released the weight of the TRX).

All but the breakover angle equal or best the Raptor’s specifications.

Ram says the TRX’s frame is 75% different from that of the base 1500 pickup. The performance model uses thicker high-strength steel with low torsion attributes to enhance stability and durability, according to the carmaker. 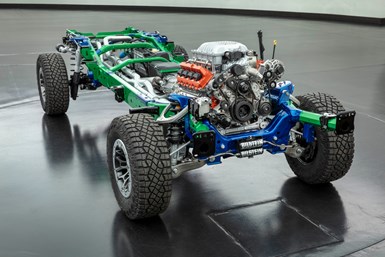 Sections of the frame are hydroformed for dimensional accuracy, reducing the need for welding, and the side rails are fully boxed. The front rails use high-strength steel and hydroformed sections to better handle the front suspension load, while galvanized frame components are designed boost corrosion protection.

Compared with the standard Ram 1500, the TRX is eight inches wider, and its front axle has been moved up to accommodate the specially designed Goodyear 35-inch tires. Composite fender flares accommodate the TRX’s six-inch wider track and one-inch wider wheels, while giving the rugged pickup an hourglass appearance.

In the rear, the TRX’s five-link coil suspension gets different hard points than the 1500’s to allow room for a Dana 60 rear axle to travel up to 13 inches. Rear wheel travel is increased 40%.

Inside Look and More Tech 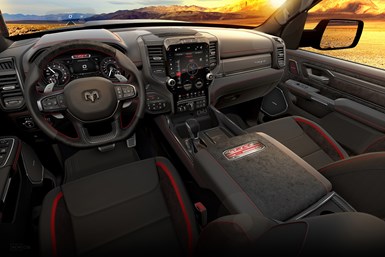 The interior is highlighted by a standard 12-inch touchscreen, whose display can be split to show two different applications. Drivers also can access real-time performance and off-road data via the touchscreen or instrument cluster.

The base 1500’s rotary gear selector has been replaced with a console-mounted performance floor shifter. Three trim packages are available.

Pricing starts at $71,700. Production is due to begin in the fourth quarter at FCA’s Sterling Heights, Mich., assembly plant, starting with the Ram 1500 TRX Launch Edition (limited to 702 units).