NASCAR could begin live racing again by mid-May. But spectators will have to stay at home for the initial events.
#racing #covid-19

Sunday’s virtual NASCAR race at the Talladega Speedway in Alabama featured plenty of action, including multiple crashes, a photo finish in overtime and the return of Jeff Gordon out of retirement. 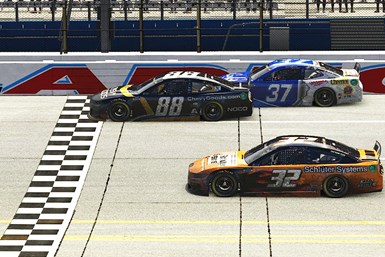 For the record, Alex Bowman held off Corey LaJoie and Ryan Preece in a two-lap overtime sprint to take the checkered flag. The victory gave Hendrick Motorsports its third straight win in the iRacing series, which has helped quench fans appetites since real world racing was suspended last month in the wake of the coronavirus.

It’s all good fun. But it isn’t the same as racing real cars on a real track with real drivers.

NASCAR ran just four of its scheduled 36 races this season before competition was suspended March 13. But organizers aim to get back on track sometime next month, with plans to make up events that were canceled and complete the full schedule by year-end.

Several southern states already have begun to lift stay-at-home restrictions, which paves the way for racing to resume. However, the initial events likely will be held without spectators in attendance to help keep fans safe.

The first live race could be as early as May 17 at Darlington Raceway in South Carolina. This could be followed with events in Charlotte and Tennessee in following weeks, including the Coca-Cola 600 in Charlotte over Memorial Day weekend.

Key to the returning to the track is allowing teams to resume work at their garages in North Carolina. Gov. Roy Cooper declared such activity qualifies as an essential business under the state’s guidelines as long as everyone adheres to social distancing rules.

Cooper also is considering NASCAR’s proposal to hold the Coca-Cola 600 without spectators on May 24. The state’s stay-at-home restrictions are due to expire on May 8.

Florida and Texas already have agreed to permit NASCAR races without fans. South Carolina and Georgia also are easing restrictions.

Formula One is taking a more cautious approach.

As many as 18 events are expected to be held this season. But the first race isn’t scheduled until July 5 with the Austrian Grand Prix. This will be followed by the British Grand Prix in Northamptonshire on July 19.

As with NASCAR, the initial F1 races will be held without fans in attendance. But F1 boss Chase Carey is hopeful that spectators will be permitted at subsequent venues, depending on local regulations.

After European races in July and August, events are being planned in Euroasia, Asia and the Americas through the rest of the year. The season-ending race will be held Abu Dhabi in December.