The redesigned Genesis G80 sedan looks a lot like the brand’s new GV80 crossover and updated G90 large car. The model also features many of the same technologies as its siblings. These are good things.

With the second-generation G80, Hyundai’s fledgling luxury unit takes its mainstream sedan to the next level.

The all-new G80 shares a rear-wheel-drive platform with the GV80, which was unveiled earlier this year. Genesis says 19% of the car’s body is made from aluminum, which shaves 243 lbs off the previous model. The 2021 model also has a lower center of gravity to enhance handling. 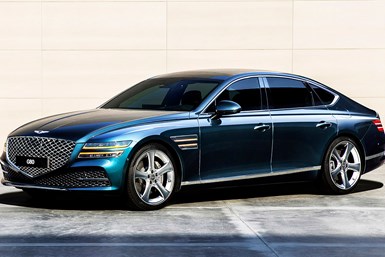 However, the new model drops the 420-hp 5.0-liter V-8 offered in the current G80. In Europe, a 2.2-liter diesel four-banger will be available that generates 210 hp and 325 lb-ft of torque. A plug-in hybrid model is expected later.

All of the engines will be mated with a carryover 8-speed automatic transmission. All-wheel drive is optional.

The new G80 gets the same front-end treatment as the GV80. This includes a massive shield-shaped grille and quad headlights. The dual turn signals and daytime running lights stretch to the outermost corners.

The current model’s long hood and rearward cab configuration are retained. But the new G80 is wider and lower to give it a more muscular stance. 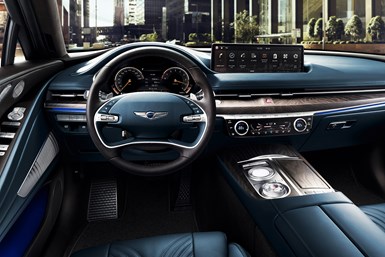 Interior highlights include a massive 14.5-inch infotainment display that can be operated via hard buttons, a touchscreen or voice controls. In addition, handwriting recognition tech allows users to write simple commands for certain features on a center-console pad.

The 12.3-inch instrument cluster has a 3D effect that is coordinated to the position of the driver’s eyes. If they prefer, users can revert to a traditional 2D display.

Visibility is enhanced by thinner A-pillars and a lower dashboard height. Genesis says there also is more rear leg- and headroom, thanks in part to a lower rear seat height.

On the tech front, the G80 has a host of advanced safety features, many of which also are available in the GV80 and/or other new Hyundai and Genesis models. This includes an adaptive suspension that makes split-second adjustments based on information provided by sensors that scan the upcoming road.

Among the other goodies are:

The G80 also gets Hyundai’s smart park system (or “smaht pahk” as pronounced with a comedic Boston accent in a Super Bowl ad) that debuted in the 2020 Sonata. The technology allows users to use a smartphone to park their car in a tight space while they’re standing outside the vehicle.

Genesis is introducing the redesigned model this week in South Korea. Debuts in the U.S. and other markets are due to follow in the second half of the year.