The all-new Hyundai Tucson is bigger, bolder and more upscale than the outgoing model, which is the carmaker’s top-selling global model. 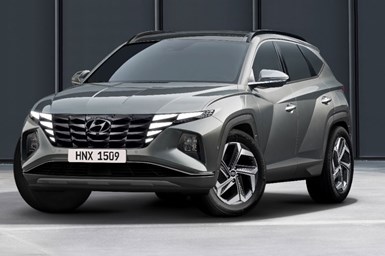 Hyundai took the wraps off the redesigned compact crossover during an online presentation Monday night. Sales begin this month in South Korea, with the U.S. and other markets due to follow in the first half of 2021. 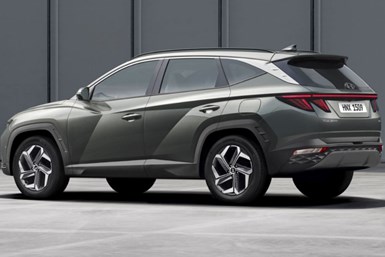 Highlights include short front and rear overhangs, bulging fenders and a flowing character line. The headlights and daytime running lamps are integrated into the grille, using LED elements that are camouflaged when not illuminated. A full-width taillight echoes the front design.

Two wheelbases will be offered in some markets, which Hyundai claims is a first for a compact crossover. The U.S. will get the long-wheelbase (108-inch) variant that stretches overall length by five inches to 182 inches. Height and width are the same for both versions at 66 inches and 73 inches, respectively.

The interior of the new model is more upscale than the outgoing Tucson, featuring more amenities and soft-touch surfaces. 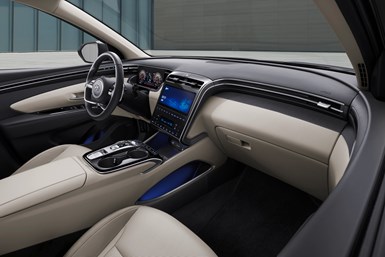 An air purification system will be available in some markets. The system also can reduce moisture from the evaporator and clean the air-conditioning system to keep it odor-free.

The base model will be powered by a 2.5-liter 4-cylinder engine that makes 190 hp and 182 lb-ft of torque. It is mated to an 8-speed automatic transmission.

Hybrid and plug-in hybrid variants also will be offered. Both feature a 1.6-liter turbocharged four-banger with a new continuously variable valve duration technology that Hyundai claims optimizes power with efficiency with minimal compromises. 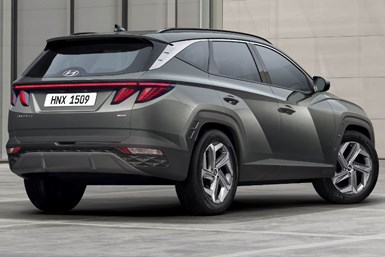 In addition to the base front-wheel-drive model, buyers can upgrade to all-wheel drive. A new “E-handling” system enhances directional stability and steering response in corners and on slippery roads, according to the carmaker.

A sporty N Line variant also will be offered.