More than twice as many shoppers now start their research online rather than at a dealership, according to the Google Dealer Guide Book. That shouldn’t surprise anyone. On a list of fun things to do, most people would put visiting a local dealer on par with having a root canal or being grilled by a tax auditor.

Shoppers want their experience to be simple and less stressful. More than two-thirds report switching to a competitor that has an easier buying process. They also want to be better informed and have quick access to brand experts. So says Cadillac, citing data from Mintel’s Car Purchasing Process and Cassandra’s Shop report.

The Best of Both Worlds

That’s what this week’s launch of Cadillac Live is all about. Described as a cross between a personal shopper and digital showroom, the service allows shoppers to interact with online product specialists, who can answer questions and demonstrate product features in real-time. 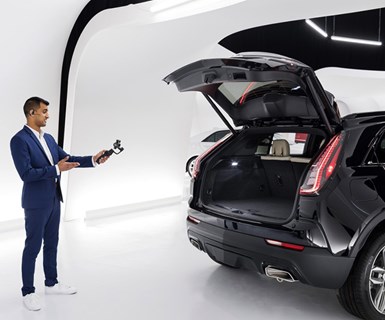 Equipped with a Bluetooth headset and a gimbal-mounted iPhone X, reps are available to chat (you can see and hear them, but they can only hear you) 16 hours a day during the work week and eight hours each on Saturday and Sunday. The digital showroom, of course, is open 24/7. The agents, who speak English, Spanish and French, operate out of a showroom in Toronto, where Cadillac launched a pilot program earlier this year.

They aren’t just static know-it-alls. Agents also can demonstrate advanced tech and everyday features, such as how much stuff you can fit in the trunk or how to work a child safety seat. For those who aren’t sure how to spec their ride, a digital interface can help them visualize color choices and other options.

For now, you still have to trek to a physical dealership to test drive a car and complete a purchase. Since March, 8% of shoppers who used Cadillac Live booked a test drive. In the U.S., such coordination initially will be limited to a handful of states, ahead of a planned national rollout next spring.

Other automakers also are experimenting with new marketing approaches. Ford has begun testing small satellite showrooms in shopping malls. The company also is giving its traditional dealerships makeovers that include computer kiosks that allow customers to view pricing and other vehicle information side-by-side with a salesperson. Sitting across a desk from each other now apparently is passe.

Next year in Europe, Volkswagen will introduce a new sales and distribution scheme, featuring direct-to-customer sales and flexible dealership and service center models. The no-dealer approach, which Tesla has used since Day 1, also is being championed by other upstart EV brands. Volvo’s new Polestar unit, for example, is opening its first “strategically placed” small showrooms in North America. But most of the purchase process, including vehicle subscription plans, will be handled online.