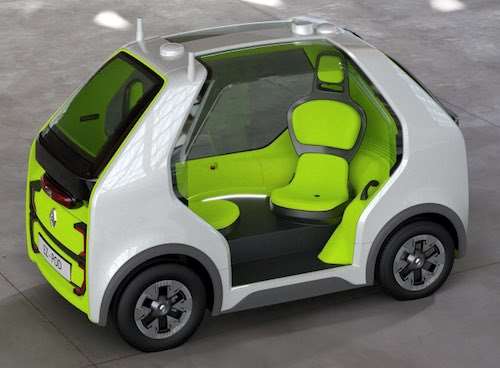 Called EZ-Pod, the tiny vehicle is designed as a shuttle that would operate over pre-defined routes independently or in trains. Renault envisions the pods being used by travelers with limited mobility or packages to carry.

In some cases, the pods might operate—at speeds under 6 kph (4 mph) on walkways shared by pedestrians so they can deliver their occupants to building entrances.

The EZ-Pod expands on EZ-Go and EZ-Pro concepts Renault unveiled last year. The new design rides on the same platform that carries the company’s Twizzy electric runabout. The interior is designed for durability and easy cleaning and features a huge side door to improve ingress and egress.