Apparently the Chinese car market isn’t for everyone.

Today Renault said it will stop making and selling Renault-brand vehicles in China through its venture with Dongfeng Motor.

Renault’s new focus in China will be on electric vehicles and light commercial trucks and vans. The company formed a commercial vehicles partnership in 2017 with Shenyang Brilliance JinBei Automobile and an EV venture last year with Jiangling Motors. 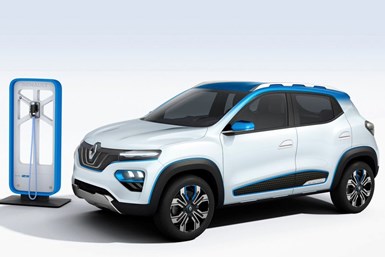 The French company will continue to supply parts and service to some 300,000 owners of Renault cars in the country.

Nor does the new strategy mean Renault is abandoning its relationship with Dongfeng. The carmaker and its alliance partner Nissan say they will continue to partner with Dongfeng on new engines, diesel supply arrangements and development work on vehicle connectivity.

Renault says its new direction is all about aligning its expertise in Europe in EVs and light commercial vehicles with transportation trends in China. The carmaker describes the latter as driven by urbanization, shifting inner city transportation options and electrified “final-mile” commercial delivery systems.

Renault points out that China remains the world’s largest EV market by far, with sales last year of 860,000 in spite of cooling demand. China has predicted that its EV sales will grow to 25% of its new-vehicle sales by 2030.

Renault’s accumulated EV sales have totaled 270,000 units worldwide since 2011. The company debuted its first Chinese electric car, the Renault City K-ZE, late last year. At the time, the company said it will add eight EVs and 12 plug-in hybrid models to its global lineup by 2022.