Delay would create a logjam of shows next spring

It seemed hard to believe that the Los Angeles auto show would be held as planned in late November with the coronavirus still raging across much of the U.S. 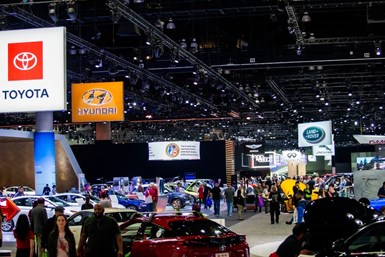 Show organizers, however, continued to hold the date while most other industry events have been postponed, canceled or transitioned to virtual formats. But it now appears L.A. has joined the crowd—or, to state it more accurately, will distance itself from the crowds.

The annual show, which was due to run Nov. 20-29, is being pushed back six months until May 21-31, Automotive News reports, citing three unnamed sources.

An official announcement could be made later this week (as of now the show’s website still lists the November date as a go), according to the report.

A spring 2021 date would sandwich the L.A. show between next year’s New York (April 2-11) and Detroit (June 19-26) events. Both of those shows were canceled outright this year.

The tight scheduling could cause some carmakers to skip one or more of the venues and/or participate with a greatly reduced presence. Of course companies already have become much more selective, choosing to opt out of international shows unless they have a significant, market-specific introduction planned.

But consecutive shows in three months in one country would up the ante in terms of logistical and financial pressures.

The Beijing auto show, which was postponed in April, is due to open on Sept. 26. But organizers haven’t released an exhibitor list.