The increase of ride-hailing services such as Uber and Lyft is bad for the environment. That’s the takeaway of a new report from the Union of Concerned Scientists (UCS). 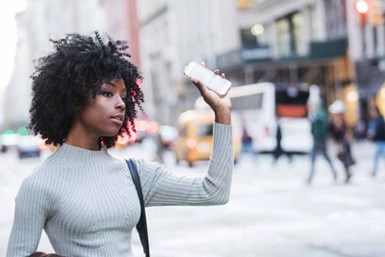 The authors contend that such businesses increase vehicle miles traveled, due to “deadheading” when drivers are traveling without passengers, which is about 42% of their time. Another problem: Nearly one in four ride-hailing trips displaces a cleaner alternative such as a train, biking, walking—or staying home.

On the plus side, ride-hailing vehicles tend to be newer and more fuel efficient than the overall U.S. fleet.

Factoring in all the variables, UCS calculates that an average ride-hailing trip results in 69% more emissions than the ride it would have replaced. This assumes that only 15% of the trips are shared among multiple passengers.

The analysis is based on data from seven cities (Boston, Chicago, Los Angeles, New York, San Francisco, Seattle and Washington, D.C.). The group also incorporates findings from other studies.

Here’s how the report says various types of ride-hailing rides stack up against conventionally powered personal cars (averaging 23.8 mpg) and other alternatives:

Combining ride-hailing with public transportation also can be beneficial. UCS says a pooled ride-hailing trip connecting to a train (in which the former accounts for a quarter of the total trip distance) can cut pollution by 50% over using a private vehicle the whole way. 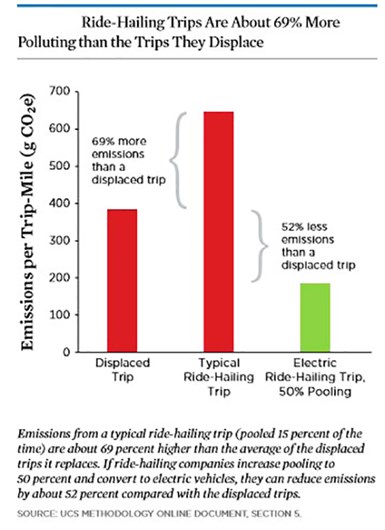 UCS takes Uber and Lyft to task for the effect they’re currently having on the environment. But the non-profit advocacy group is pushing for changes that could make ride-sharing part of the solution. To do so, the report calls for:

A pooled EV ride-share is 79% cleaner than a combustion-powered vehicle that carries a single passenger, according to the study.

For their part, Uber and Lyft say they already are working on such initiatives. They also assert that UCS and similar reports significantly overestimate the impact ride-hailing services have on congestion and emissions.

Even if Uber and Lyft convert entirely to EVs, ride-sharing still could be problematic.

UCS says the increased mileage and congestion from non-pooled rides would increase the emissions of conventionally powered vehicles stuck in traffic. This also would increase noise pollution, the potential for accidents and make it more difficult to walk or bike on public roads, according to the authors.