After a 50-year hiatus, Britain’s Morris Commercial is being relaunched as a maker of electric trucks.
#Jaguar #europe

After a 51-year hiatus, Britain’s Morris Commercial is being relaunched as a maker of electric trucks. 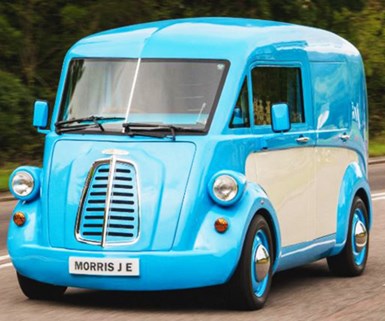 The new company, which was formed by a group of European investors, plans to introduce the retro-styled JE panel van in late 2021. A prototype model unveiled this week borrows styling cues—including a tall pear-shaped grille, split windshield and fender-mounted headlights—from the Morris J-Type van that was built between 1949 and 1961.

The 2.5-metric ton EV is capable of hauling 2,200 lbs in its 194-cu-ft cargo compartment, according to the carmaker. Morris says the truck’s 60-kWh battery will provide a 200-mile driving range. The unit can be charged to 80% capacity in 30 minutes.

The company also plans to use the modular platform to carry several other models. These include a pickup truck, camper van and MPV.