In April, Plymouth, Mich.-based Rivian Automotive pushed back launch plans for its upcoming electric trucks from late this year to early 2021 due to delays related to the coronavirus lockdown. 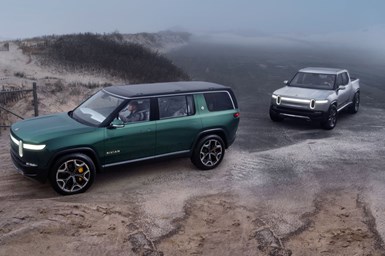 This week the startup began pilot production at the former Mitsubishi Motors plant in Normal, Ill. And the company has announced updated delivery targets for its R1T pickup and R1S SUV, which are now due in about one year.

The R1T pickup will hit the streets first, with a June 2021 target. It will be followed two months later by the R1S SUV.

Both models will be built on Rivian’s skateboard chassis, which also will carry the electric vans the carmaker will build for Amazon. That program is due to start next year too.

The Rivian trucks have an estimated range of more than 400 miles per charge with their most powerful battery configuration. More information about the vehicles will be released later this year.

Expect a steady dose of photos, product specs, plant information and other news over the next year.

Rivian is not only is competing with Tesla, other startups and traditional OEMs on the product front as a wave of electric trucks are due to arrive over the next two years. It also is vying to build enthusiasm with potential customers and investors.

The latter hasn’t been a problem for Rivian, even with the recent delays. Earlier this month it landed another $2.5 billion to bring its total to more than $5 billion, with Amazon, Ford, Cox Automotive and several private equity companies on board.

But it isn’t all good news. On June 22, Tesla filed a lawsuit against Rivian, alleging the startup poached employees and stole trade secrets. Rivian denies the charges.

You can count on plenty more excitement over the next year.