Ford has unleashed doglike robots to sniff around one of its Detroit-area factories.

Half the Cost, Half the Time

Such surveys are used to update factory floor schematics. Ford notes that, over time, adjustments to equipment occur that aren’t always documented but need to be accounted for ahead of a major retooling job.

Normally, manufacturing engineers perform a survey by trundling around equipment on tripods, setting up for a five-minute scan before repeating the process at the next location. It’s a routine that can take two weeks and cost $300,000 per factory.

The 70-lb electric canines, which Ford is leasing from Boston Dynamics, cost less than $75,000 and can do their job in half the time. 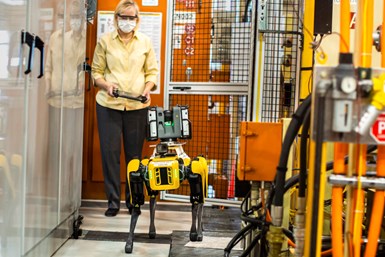 And yes, Fluffy and Spot can sit, shake hands, dance and roll over. But Ford isn’t interested in dog tricks. The company points out that being able to scan quicker means shorter retooling times that can help get new models to market sooner.

The robots stroll around at about 3 mph for as long as about two hours per charge. They’re also able to scamper up and down 30% ramps, negotiate stairs, crouch or stretch for a better view and pick themselves up if they topple. Ford notes that the mechanical dogs are able to get in and out of tight areas that would be difficult for a human to access.

To save power while traveling along smooth aisles from one scanning location to another, Fluffy and Spot can sit on their haunches and hitch a ride aboard a small shuttle nicknamed Scouter.

Initially, Ford is programming the robotic creatures to follow predetermined routes. They’re also tailed by a plant engineer equipped with a gaming-like controller. The device also lets the robot’s handler see what the robot sees.

Ford’s longer-term goal is to monitor the mechanical pooches remotely as they autonomously canvass a plant floor.