Starship Technologies, a San Francisco-based startup specializing in small automated delivery robots, says it has raised $40 million in funding and aims to expand its service 100 college campuses in the next two years.
#Amazon #tech

Starship Technologies, a San Francisco-based startup specializing in small automated delivery robots, says it has raised $40 million in funding and aims to expand its service to 100 college campuses in the next two years. 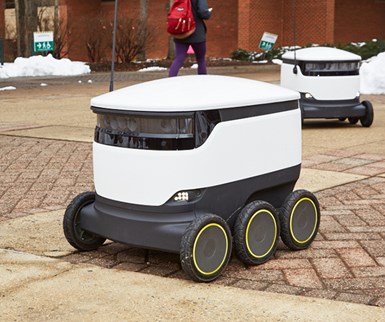 Launched in 2014 by Skype co-founders Ahti Heinla and Janus Friis, Starship now has raised a total of $85 million. The company says its robots, which have six wheels and are about the size of a portable ice chest, have made more than 100,000 deliveries in the last three years in 100 cities in the U.S. and Europe.

The bots are dispatched from a central location to pick up food or other items from a third-party vendor and deliver it directly to a customer’s door. Designed to travel primarily on sidewalks, the bots have a top speed of 4 mph.

Each unit is equipped with a mix of radar, cameras and ultrasonic sensors to assess their surroundings. A remote human operator monitors the local fleet and can take control of the bot if necessary.

The first application on a college campus was launched in January at George Mason University in Washington, D.C. Several other colleges have added the service this year, and Purdue University in Indiana is due to go online next week.

Other companies, including Amazon, FedEx and Postmates, are developing similar delivery robots. Amazon began testing its Scout robot in Seattle earlier this year and last month announced plans to expand service to California.