Roush Enterprises’ CleanTech operations has fitted alternative power systems on some 37,000 vehicles since it was formed in 2010. To date, most of the applications have been propane-powered units.

Now the supplier is entering the electric truck market with a modified version of the Class 6 Ford F-650.

The program, which is partially funded by California’s South Coast Air Quality Management District agency, will kick off this year with a pair of demonstration models that Roush CleanTech will supply to Penske Truck Leasing as part of that company’s southern California fleet.

Production for other customers will start next summer.

The electric F-650s will be available in three wheelbases—topping out at 281 inches and a gross vehicle weight of 26,000 lbs—to accommodate a variety of applications and vocations. Maximum payload capacity is 14,500 lbs.

Roush serves as the systems integrator for the program. 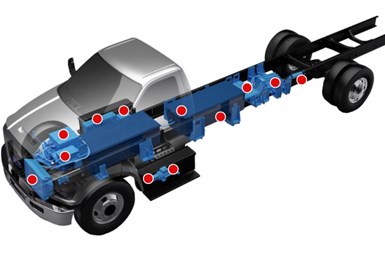 The powertrain features a permanent magnet electric motor that generates 201 hp and 907 lb-ft of torque. Vehicle speed is limited to 65 mph.

A pair of lithium-ion batteries are packaged between the frame rails, with one positioned underneath the cab and the other directly behind it. The 138-kWh system provides a 100-mile driving range. It takes about 10 hours to fully replenish the batteries using a Level 2 charger.

CleanTech will outfit the electric trucks at its facility in Livonia, Mich.

In addition to Ford commercial trucks, the supplier also provides alternative propulsion systems for Blue Bird school buses in the U.S. and Canada.

Roush Industries will contribute its engineering expertise to the EV program. The company has been developing electric vehicle technologies for more than 20 years, starting with a modified version of the 1998 Ford Ranger.

The supplier opened a technical center for autonomous and electrified vehicles three years ago. Located in Troy, Mich., the facility tests various subsystems, including software and data analytics.