Mercedes wants you to take a seat. Any seat. Then sit back and enjoy the experience.

The German luxury marque is introducing its second-generation MBUX (Mercedes-Benz User Experience) with the redesigned 2021 S-Class sedan due later this year.

Featuring a long list of functions and capabilities—including as many as five digital displays (two in front and three in the rear)—the upgraded system promises to be more detailed, thoughtful and individual, while providing the “utmost in comfort and convenience.”

Here are a few takeaways:

As many as seven different user profiles can be stored and uploaded to the cloud via the Mercedes Me app. 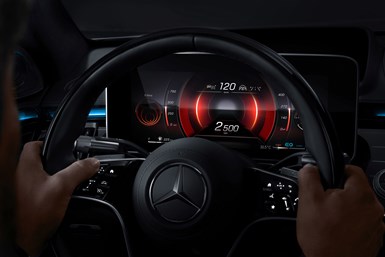 Occupants can access their info from any seat in the S-Class, as well as in any other future models equipped with the next-gen tech. A mix of barcodes, PINs and biometric safeguards—fingerprints, facial recognition and voice actuation—are used to keep things secure.

Once connected, the system automatically adjusts seating, climate control, infotainment and other settings to a user’s preference. With the help of artificial intelligence, any necessary tweaks can be done on the fly, such as adjusting mirror positions to a person’s height and personal preference.

The standard 12.8-inch, portrait-oriented center touchscreen allows users to control a growing number of infotainment and vehicle systems. Climate controls are locked to the bottom of the display for easy access. 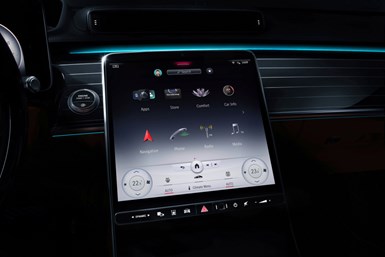 In addition to touch inputs with optional haptic feedback, the system responds to conversational-type voice commands (in 27 languages), swiping, hand gestures and even eye movements. Mercedes claims the setup eliminates 27 buttons and switches from the center console. 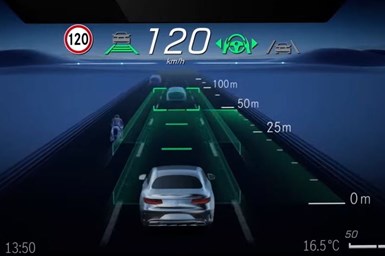 The digital instrument cluster uses what’s described as stereoscopic technology with a special pixel structure and aperture grille to create a 3D effect. The system uses cameras to continuously adjust and optimize the display based on the driver’s eyes and head position.

Back-Seat Riders Get Their Due

Recognizing that many S-Class owners are chauffeured (particularly in China), Mercedes offers as many as three touchscreens for rear-seat passengers. Two are attached to the front seats, while the third is integrated into the central armrest. 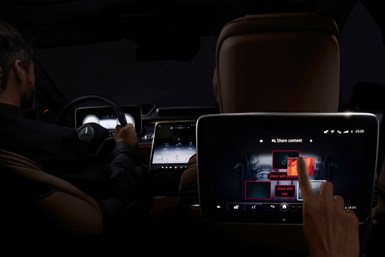 The rear units provide access to the full suite of MBUX controls. In addition to infotainment features and their own climate control settings, rear passengers can access navigation and other vehicle features.

Passengers can share information—including playlists or restaurant reviews—with each other through their displays.

There also are some cool safety enhancements.

Teaming the car’s blind-spot and facial monitoring systems, for example, can help prevent occupants from opening a door and stepping into traffic. The ambient lighting flashes red to alert users of potential danger.

Cameras in the overhead control panel use learning algorithms to recognize and anticipate an occupant’s intentions based on head position, hand movements and body language, according to the carmaker. Examples include lighting an area of the car where an occupant appears to be searching for something, automatically shading the rear window and pre-selecting controls for features at which a driver is looking.

In case you’re wondering, drivers also can opt for an “understated” mode. That’s if they just want to enjoy the ride, old school style.