Officials opted not to red flag the race as the track was being cleared, then restart it under green for a full speed “overtime” finish.

It’s not the most exciting way to finish a race (compared with NASCAR shootouts). But this year, erring on the side of caution seems appropriate.

After all an “abundance of caution” prompted organizers to delay the Indy 500 nearly two months from its traditional Memorial Day weekend slot. For the same reason, the race was held without any spectators in the stadium and all participants were required to wear masks.

What About the Race?

IndyCar started its season in early June (a few weeks after NASCAR), with Dixon winning the first three events and leading in points through the first six. He looked like the car to beat at the legendary Brickyard too, leading 111 of the 200 laps. 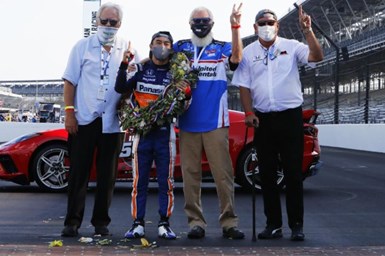 But Sato took the lead with about 20 laps to go and held onto it through the final pit stops and last 10 laps of green flag running. It was Sato’s second Indy 500 win—he became the first Japanese driver to take the checkered flag at the iconic American event in 2017.

The race was the first Indy 500 since Roger Penske acquired IndyCar and the Indianapolis Speedway last autumn. It also was the first time without fans in attendance. The speedway, which typically draws more than 300,000 fans on race day, had an estimated 2,500 people—mostly race team members and track personnel—on site this year.

It’s not quite normal. But safety still should rule the day until there’s a substantial decline in COVID-19 case levels and/or a viable vaccine is discovered.