Save the Environment, Drive a Jeep?

The Jeep Wrangler has a lot going for it. 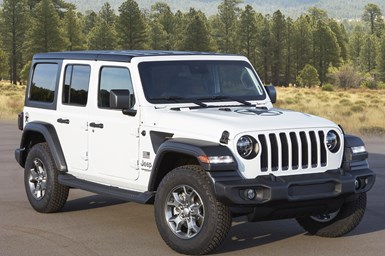 The nameplate, which has been around since 1986, won several industry awards when the fourth-generation model was launched two years ago. Last year, some 228,000 of the midsize crossover/SUVs were sold in the U.S., which is down slightly from 2019 levels but still respectable.

Buyers typically are drawn to the Wrangler’s rugged off-road performance. Another selling point is the truck’s utility, which includes a removable roof and doors.

That’s all well and good. But what about its environmental bona fides?

Jeep boasts the new Wrangler Unlimited holds up well in this regard too, comparatively speaking at least. The carmaker calculates that the latest model has a 15% lower global warming potential than its predecessor over a 150,000-mile lifecycle. This is based on:

Much of the gain is attributed to a more efficient powertrain. The new Wrangler features an optional 2.0-liter turbocharged 4-cylinder engine—and a 48-volt mild-hybrid system in some configurations—and a new 8-speed automatic transmission or 6-speed manual. This compares with the previous model’s 3.6-liter Pentastar V-6 (which is still available), mated with a 5-speed automatic transmission.

Wranglers powered by the turbo four-banger and 8-speed gearbox have a U.S. Environmental Protection Agency fuel economy rating of 21 mpg. That’s a 3-mpg improvement over the V-6/5-speed combination.

The redesigned Wrangler also benefits from a multi-material design that includes a mix of aluminum, sheet-molding compound and high-strength steel. Jeep says non-ferrous metals now account for 20% of the vehicle’s weight, up from 12% previously, which helps enable a 203-lb overall reduction.

All told, the enhanced design and improved efficiency can provide a 14-metric-ton reduction of C02-equivalent greenhouse-gas (GHG) emissions, according to the carmaker. Jeep says the reduction is equivalent to the:

Stated another way, the reduced emissions from each 2.0-liter Wrangler over its lifetime has the potential to account for the annual carbon sequestration of a 16.5-acre forest.

Details haven’t been released yet. But you can count on a significant boost in fuel efficiency and a corresponding reduction in emissions. It’s all part of Jeep’s revised strategy to brand itself both for its traditional “trail-rated” performance and on new environmental credentials.

Such a combination soon could become the price of admission in an increasingly competitive segment that also includes the new Ford Bronco.