The Kansas City Chiefs won the Super Bowl in dramatic fashion, scoring three touchdowns in the final 6 minutes to defeat the San Francisco 49ers 31-20—giving the team its first championship in 50 years.

Great. But what about the battle of the car commercials?

Overall, eight car brands aired Super Bowl spots, up from five last year. (See how they stack up against all the Super Bowl commercials.)

A 30-second spot reportedly cost $5.6 million—and several automakers doubled the ante with ads that ran a full minute. The payback: An estimated 100 million people were expected to tune into the big game.

Meanwhile, GMC’s Hummer EV promo was deemed less than electrifying. It was faulted for its lack of information or pizazz, despite co-starring NBA superstar LeBron James.

According to Ad Age, the automotive scoring leaders (rated on a scale of 1 to 5 footballs) were:

Don’t trust the reviewers? Now’s your chance to watch all eight of the car commercials and judge for yourself. 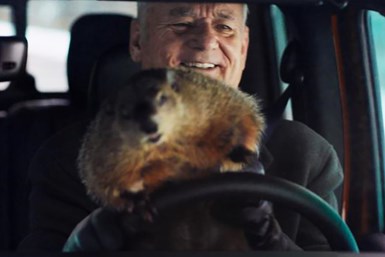 For only the second time in Super Bowl history, the game was played on Groundhog Day.

Jeep capitalized on this quirk of the calendar by reuniting actor Bill Murray with several of his co-stars from the popular 1993 movie, in which he’s forced to relive the bellwether day over and over again until he gets it right. In the Jeep ad, Murray and his prognosticating sidekick have the time of their lives by reinventing their daily routines in a Gladiator pickup. Watch it.

Chilling with the Audi e-tron

"Game of Thrones" actress and environmental activist Maisie Williams detours around a traffic jam toward a more sustainable future in Audi’s electric car, while singing "Let It Go" from Disney's Frozen.

A wild car chase featuring the Taycan flips the script at the end with the tagline: “Finally, an electric car that steals you.”

Singer John Legend and his supermodel wife Chrissy Teigen say goodbye to the old guard by introducing “young luxury” in the form of the Genesis GV80 crossover.

The Highlander “Goes where they need you,” in this case rescuing actors from harrowing movie scenes.

Kia pledges to donate to charities as NFL star Josh Jacobs details his personal experiences of growing up homeless.