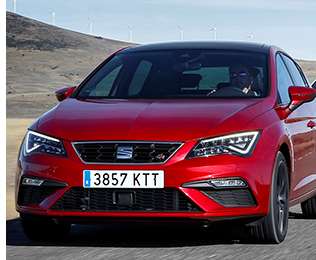 The Arona TGI is the first SUV/crossover equipped with a CNG engine, according to the carmaker. Equipped with three CNG tanks, the vehicle can travel 360 km (224 miles) in CNG mode and another 150 km (93 miles) using gasoline on the new WLTP cycle.
The new Ibiza TGI reintroduces CNG compatibility for the nameplate, with the new model adding a third CNG tank and overall range of 510 km. Mated with a 6-speed manual transmission, the Ibiza and Arona are powered by a 1.0-liter engine that can run on gasoline or CNG.
SEAT also offers CNG versions of its Leon compact car (pictured) and tiny Mii model. The Leon TGI, fitted with a third CNG tank to increase driving range to 440 km (273 miles) in CNG mode and 360 miles overall. The Mii Ecofuel has two CNG tanks that provide a range of 290 km (180 miles)—and 293 miles overall.

SEAT says running on CNG is about 50% cheaper than gasoline and can cut carbon dioxide emissions by about 25%. Initial costs of the technology are equivalent to that of a diesel engine, but operating costs are 30% less.

The engines automatically switch to gasoline when the CNG tanks are depleted and at start-up when outside temperatures are below -10°C (14°F). Once the gas injectors are heated, the engine transitions to CNG mode.