Closing off streets creates more room for biking and walking

Washington, which was the first state in the U.S. to report coronavirus cases in February, has been praised for its response to the pandemic.

Seattle and other Washington cities were quick to implement new healthcare policies and stay-at-home restrictions. Some of the changes now are being made permanent, including street closures and other infrastructure improvements.

“Just like we must each adapt to a new normal going forward, so, too, must our city and the ways in which we get around, Seattle Mayor Jenny Durkan declared Thursday in announcing the “Stay Healthy Streets (SHS)” initiative.

The program closes off about 20 miles of residential streets to most through traffic. 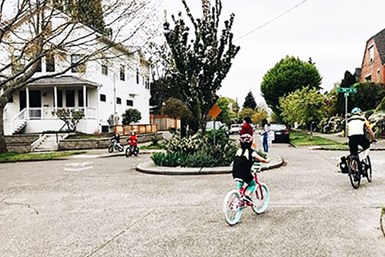 The goal is to provide more space for people to walk and bike at a safe distance away from each other. Such restrictions also are expected to help residents stay closer to home and to decrease large gatherings in local parks.

Residents still will be able to drive to and from their homes. Delivery services, emergency response vehicles and garbage and recycling trucks also will continue to be able to access the streets.

SHS, which already has been implemented on a temporary basis in many neighborhoods during the outbreak of the pandemic, will be made permanent at the end of May when Washington starts to relax its stay-at-home mandates.

More streets could be closed in coming months based on community demand, Seattle Dept. of Transportation. Streets used by public transit or where bus drivers park for breaks won’t be closed.

Seattle, which has been an early adopter of ride-hailing and car- and bike-sharing programs (with mixed success), also is implementing several other initiatives in response to the coronavirus.

“Our rapid response to the challenges posed by COVID-19 have been transformative in a number of places across the city,” SDOT Director Sam Zimbabwe said. “Some of the responses are going to be long lasting, and we need to continue to build out a transportation system that enables people of all ages and abilities to bike and walk across the city.”

Seattle’s action plans as well as various demographic factors, such as education level and population density, put it on the fast track to recovery, according to a recent Moody’s Analytics report.

In addition to Seattle, Moody’s lists San Jose, Calif.; Durham, N.C.; Austin, Texas; and Minneapolis, Minn., as the cities most likely to recover the fastest among the top 100 metro areas in the U.S. Bringing up the bottom are New York City, Boston, Miami, Las Vegas and San Francisco.