BMW has long been one of SGL Carbon’s largest customers, using the pricey material to help cut weight in a variety of low-volume applications. 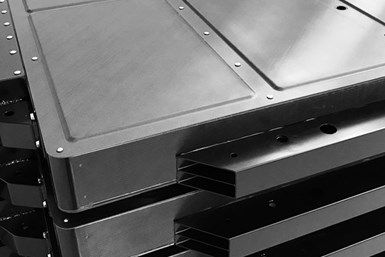 But lightweighting isn’t the only purported benefit. SGL also claims carbon fiber is the best material for:

In addition, SGL says carbon fiber composites are well-suited for stressed structures or load-bearing elements, such as the underbody panels and side frames. In new “skateboard” EV platforms, the battery case serves as a structural component in the underbody.

Last year, SGL partnered with NIO on a carbon fiber battery case for the Chinese company’s EVs. SGL says the design, which combines a sandwich core with multiple layers of carbon fiber non-crimped fabrics, has a 200 times lower thermal conductivity than aluminum.

The supplier also will supply carbon fiber EV battery cases to a European sports car and an unnamed North American-based carmaker. Production on both programs is due to start later this year.

SGL has worked with BMW for more than a decade. The two companies launched joint ventures in Germany and the U.S. in 2009, in which SGL later took 100% ownership.

In addition to battery cases, SGL will continue to supply BMW with carbon-fiber-reinforced plastic body panels for the i3 EV and 7 Series sedan. The company also will provide various carbon materials for the upcoming iNext flagship EV that’s due next year.