A 40-foot-wide sinkhole has consumed eight historic Corvettes at the National Corvette Museum in Bowling Green, Ky., Automotive News reports. photo: Automotive News The museum says the 30-foot-deep chasm opened up under the floor of the facility's Skydome area at about 5:40 a.m.
#PPG #oddities 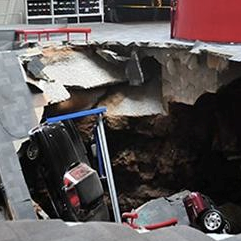 The museum says the 30-foot-deep chasm opened up under the floor of the facility's Skydome area at about 5:40 a.m. Wednesday.

No people were injured, but the vehicular damage was considerable. The engulfed cars include several one-of-a-kind models:

The facility is awaiting an assessment from structural engineers to determine when the display area will be safe to enter. The museum is close to the Corvette factory in a region of Kentucky known for its caves and sinkholes, the latter of which can form unexpectedly over time.