Applications should be nimble and customizable, not one-size-fits all 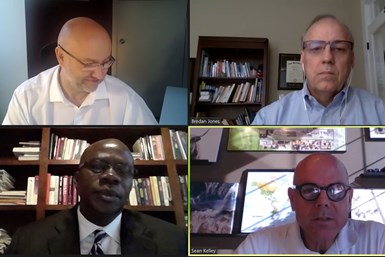 Solutions also need to be customizable to meet the specific needs of different cities. But city planners must be careful not to make major investments or quick fixes without considering long-term implications.

So says a panel of experts participating on a Smart Mobility session this week at the Center for Automotive Research’s Management Briefing Seminars.

“It’s going to be a multiplicity of solutions that drive us to the new urban environment,” asserts Brendan Jones, COO of Blink Charging, which specializes in electric vehicle charging equipment and services.

“We need to look at a variety of emerging technologies, consumer demand for the technologies and the city’s needs,” he notes. “Not just in terms of smart mobility but what the populace wants and the lifestyle of that particular urban environment.”

“Interconnectivity is only as good as users’ ability to absorb it,” Taylor says, noting that not everyone owns a smartphone or has a bank account to allow them to access cloud-based systems and automated payment options. “At the end of day, a city has responsibility to all of its citizens, including people with disabilities and those without smart phones and other resources.”

Infrastructure improvements aren’t cheap. That’s why it’s critical to take the proper time and get input from all affected constituents before making and implementing a decision, the panelists agree.

Michigan, for example, is studying several options to pay for road improvements after proposed tax hikes were voted down. But there are no easy fixes, says Paul Ajegba, director of the Michigan Department of Transportation. He notes that adding tolls to select highways, for example, could increase congestion on other roads, which is exactly what happened when Sydney, Australia, implemented a toll system.

Caution also should be taken when adding public chargers for electric vehicles, Jones says. He notes that Blink and other companies already have had to tear down charging stations installed several years ago because they weren’t located in areas with enough EV traffic to support them. In addition, he points out, that most EV owners primarily recharge their vehicles at home.

In Amsterdam, meanwhile, the city has removed about 10,000 parking spaces to make more room for sidewalks and bike lanes, Taylor says. “Cities need to adapt quickly as public preferences and other circumstances change.”

In some cases, Taylor adds, public transportation isn’t deployed efficiently. As an example, he cites double-decker buses running at 10 p.m. with only one passenger on board.

Transportation providers need to study how services are delivered rather than just doing it themselves. “We need to right size our fleets and get the infrastructure right,” Taylor stresses.

This will take greater coordination and cohesive policies at the national, state and local levels with input from industry and citizens, Ajegba adds. “Public private partnership is key to success in this arena.”

Mobility-as-a-service will play a key role in the future, the panelists agree. This includes integrated planning and payment platforms that take into account first- and last-mile transportation.

“There has to be balanced solutions and smart capital investments that work for everyone,” Jones says.