Solar-Powered Prius Is Good to Go, but Not Far

Wouldn’t it be great if your electric car could be charged up by the sun?

Don’t hold your breath. Toyota has been testing the idea since last July with a Prius sedan whose hood, roof and rear deck are covered with solar panels. 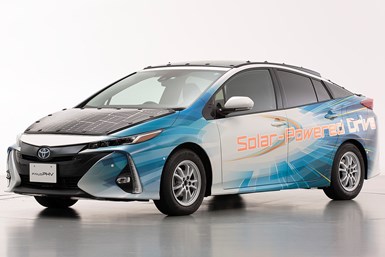 The results are promising, Reuters reports. But drivers will want to keep that charging cable in the trunk in case the weather isn’t perfect.

Toyota says its test car was able to harness enough power during a perfect day in the sun to travel about 35 miles. That’s slightly more than the distance covered by the average U.S. motorist, according to AAA.

But if your day includes some clouds (or is just too hot), then you’ll end up short on enough juice to get through the day.

Toyota says that external charging would be a must in real-world conditions. That may explain why Toyota has been evaluating the technology with a hybrid Prius, which can simply switch to piston-power to make sure the testing team isn’t stranded. 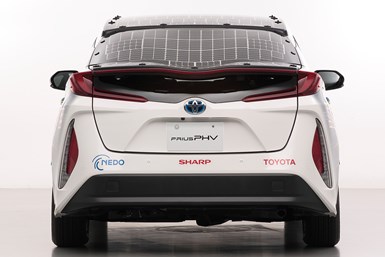 Even the rear hatch window is covered with cells.

The test car uses ultra-thin (0.1 inch) and highly flexible solar panels that were designed for use by satellites.

Form-fitting arrays on the hood, roof, rear hatch door and rear deck are rated at a combined 860 watts. Toyota says the panels are at least 34% efficient at converting sunlight into electrical energy.

The arrays send what they collect to an extra battery in the trunk, which adds 180 lbs to the car’s curb weight.

Toyota concedes that the whole setup is far too expensive to make commercial sense and will remain that way for years.

But the test does show what’s possible with the sort of flexible solar cells that would be necessary from a style standpoint to integrate into a vehicle’s contours.