Something Fun (and Fast) from Ford

If you think EVs are a drag, check out the Mustang Cobra Jet
#racing #Ford #HP

Ford took the drag racing world by storm in 1968 with the Mustang 428 Cobra Jet, which featured a specially tuned 428-cu-in V-8 engine that generated 410 hp.

The legendary racer has inspired several limited-edition models, including a 50th anniversary variant in 2018. That car’s 5.2-liter Coyote V-8 propelled it to a top speed of 150 mph and boasted a quarter-mile time of about 8.5 seconds.

The latest example brings the Cobra Jet into the electric age. 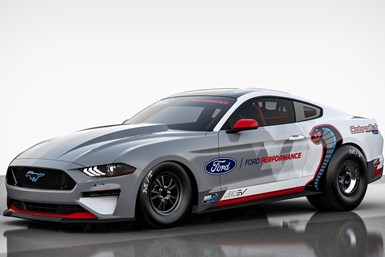 Performance fans should like the results. Ford says the new battery-powered Mustang Cobra Jet 1400 will kick out more than 1,400 hp and some 1,100 lb-ft of torque. The company estimates the car will top out at 170 mph and cover a quarter mile in the low-8-second range.

Ford’s Performance unit partnered with several suppliers on the project. The list includes:

Ford and other automakers have long used motorsports to test new technologies and push them to the limit. While the price to compete can be daunting, success on the track is something that can be promoted for a long time (the recent “Ford v Ferrari” movie is about the Detroit automaker’s quest to get its groove back in the 1960s).

But drag racing? With an electric car?

Here’s how Dave Pericak, global director of Ford Icons, explains it: “Ford has always used motorsport to demonstrate innovation. Electric powertrains give us a completely new kind of performance and the all-electric Cobra Jet 1400 is one example of pushing new technology to the absolute limit.”

“We saw the Cobra Jet 1400 project as an opportunity to start developing electric powertrains in a race car package that we already had a lot of experience with, so we had performance benchmarks we wanted to match and beat right now,” adds Mark Rushbrook, Global Director, Ford Performance Motorsports.

The Cobra Jet 1400 also ties in well with the launch of Ford’s upcoming Mustang Mach-E crossover, which is due later this year. With Ford playing catch-up in the nascent EV segment, the Mach-E promises to be an important model in the company’s future—so any help it can get with the Cobra Jet and other halo cars, the better.

Ford plans to debut the new Cobra Jet at NHRA races later this year, assuming such events are being held again by then.

The Mustang will compete against an electric variant of the Chevy Camaro, its longtime pony car rival. Introduced in 2018, the eCOPO Camaro dragster generates 700 hp and 600 lb-ft of torque. On paper, the Cobra Jet has the edge—promising to beat the eCOPO’s 9.8-second quarter-mile time by about 1.5 seconds.

For now, speed freaks can catch a sneak peek of the new Ford model on the latest episode of Motor Trend’s "Hard Cell" series. Or in Ford’s teaser video (top).