What could possibly be cooler than designing advanced concept cars for a living? How about crafting a spacemobile for tooling around on the moon.

That’s the task the editors of Document Journal (DJ) assigned Lexus as part of a special section called “The Lunar Design Portfolio.” Needless to say, the results are...out of this world.

Lexus was in the middle of designing its LF-30 Future Concept vehicle, which was unveiled at the Tokyo auto show last October, when it was approached by DJ. 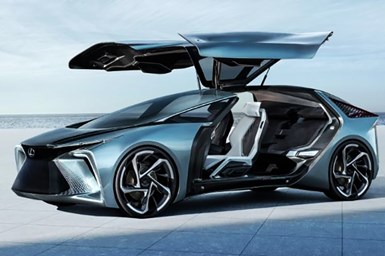 With the LF-30, the design team already was exploring how advanced technology will change the way people interact with vehicles, notes Ian Cartabiano, who heads the European Advanced Design Studio (ED2) that Lexus shares with parent Toyota.

The lunar project gave the team a chance to “dream further out” and apply some of the LF-30’s design language. But the vehicles also had to be functional, which in this case means navigating the moon’s rocky terrain and low-gravity atmosphere.

At the same time, Lexus wanted the space vehicles to be fun to drive, avante garde and, naturally, convey a premium style. To this end, five ED2 designers penned seven concepts. Enjoy their flight of fancy.

Penned by Karl Dujardin, the Zero Gravity is essentially a moon motorcycle that can hover (thanks to magnetic levitation technology) above the surface. It also reinterprets Lexus’ signature spindle grille and has an estimated top speed of 310 mph.

As the name suggests, the Cosmos goes well beyond a simple moon buggy. The concept teams an expansive Lexus mothership—complete with an observatory and space swimming pool—with the Moon Explorator module. The man behind the vision: Jean-Baptiste Henry.

Occupants sit in gyroscope cell with a stabilizer encased in a flexible graphene nanotube bubble. The design allows riders to jump and roll, hopping over a wide range of terrain, which Lexus says creates a “fun yet protected feel.”

Conceived by Keisuke Matsuno, this one is a true multipurpose vehicle. The Lunar Cruiser’s oversize tires allow it to traverse the moon’s rocky surface. Or, the wheels can be flipped 90° to act as ducted fans and allow the vehicle to fly like a drone.

The Lunar Mission is a last-mile transporter to the moon’s surface—possibly flying from the mothership. It features spindle-shaped wings and a reflective body surface. Yung Presciutti is responsible for the styling.

Presciutti also created the Moon Racer, a single-seat moon-terrain vehicle with a glass cockpit. Lexus says the vehicle will allow enthusiasts to “jump, climb, race and discover” the entire moon (both the light and dark sides).

The Lexus Lunar completes Presciutti’s moon design trifecta. The go-anywhere transporter rides on six rugged wheels. The top half can be detached to serve as living quarters.

DJ also asked designers, writers and deep thinkers from other industries to examine what architecture, clothes, music, culture and society as a whole would be like for people living on the moon. The premise being that in the not-too-distant future (maybe as soon as 2024) Earthlings will colonize the moon and use it as a base camp to travel to Mars and other worlds.

Check out their space stories (odysseys) for the full Major Tom affect.

Back to the Future

As strange as it may seem, the design project isn’t the auto industry’s first moon mission. In fact, General Motors helped design the navigation systems for the early Apollo progams in the 1960s. GM also worked with Boeing to develop the original Lunar Rover vehicles that astronauts drove on the moon in the early 1970s.

More recently Audi created its own design study, and SpaceX (Elon Musk’s other company) launched a Tesla Roadster into space as part of a rocket that eventually will orbit close to Mars.

Toyota also is on board. Last year, it began working with Japan's space agency to develop a manned lunar rover that will be powered by a fuel cell-electric system.