There’s a new king of the road. 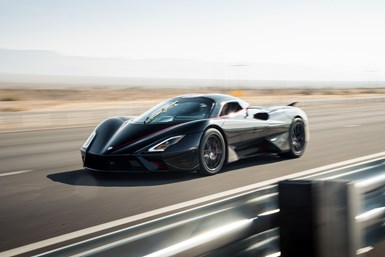 Richland, Wash.-based SSC North America blew past the speed record for a production car of 277.9 mph set in 2017 by a Koenigsegg Agera with plenty to spare.

SSC’s Tuatara hypercar had an average top speed of 316.1 mph over two runs. This includes a neck-snapping 331.2 mph in one direction and 301.1 mph in the other direction.

Room in the Tank

To add insult to pedestrianism, SSC achieved the record-shattering feat over the same 7-mile stretch of Route 160 (which was temporarily closed to the public, of course) near Las Vegas that Koenigsegg used three years ago. 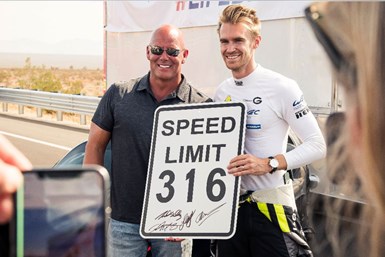 “There was definitely more in there. And with better conditions, I know we could have gone faster,” adds driver Oliver Webb, citing strong crosswinds. “As I approached 331 mph, the Tuatara climbed almost 20 mph within the last five seconds. It was still pulling well.”

The new record was set on Oct. 10th, but SSC didn’t officially announce it until this morning.

Other key metrics include:

SSC, which was formed in 1999 by entrepreneur Jarod Shelby (no relation to Carroll), developed the Tuatara in partnership with Castriota Design.

In addition to the “fastest production vehicle” mark, SSC broke the world records for:

The Tuatara is the second production model to break the 300-mph threshold. It joins a special-edition version of the Bugatti Chiron, which clocked in at nearly 305 mph on a test track in Germany last September. Due to concerns about track debris, Bugatti conducted only one run. Consecutive runs in opposite directions—to negate the effects of wind and road gradient—within an hour are needed to qualify for the Guinness World Record.

Bugatti, Koenigsegg and SSC have been besting each other over the last decade. SSC last held the title with its Ultimate Aero, which was ousted in 2010 by the Bugatti Veyron Super Sport.

Except for bragging rights. Or if you like things that go superfast.