Startup Aims to Shine a Light on Roadside Wrecks

“We are as much a cause as a company.”

The cause is a good one: reducing the number of accidents involving disabled and parked vehicles on or near the side of a road. 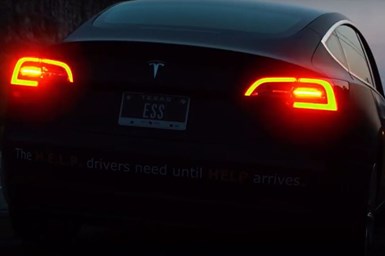 These types of accidents—including multi-car pileups, occupants who have exited the disabled car and good Samaritans who stopped to help—happen every seven minutes in the U.S., according to an analysis of government data conducted by Impact Research.

The results can be tragic.

Nearly 15,000 people per year in 2016-2018 were injured or killed in crashes involving disabled and stationary vehicles, the researchers found. The total includes an average of 566 fatalities during the period.

And the frequency rate has increased about 10% in recent years, according to the study.

But ESS believes most of the accidents can be avoided.

Its solution: making the hazard lights of disabled vehicles more noticeable to other motorists by increasing flash rates.

The company notes that current hazard lights haven’t been improved much since they were introduced in 1951. Part of the problem is that U.S. regulations haven’t been updated since the safety lights were mandated in the late 1960s.

Tucker became aware of the problem from personal experience.

Shortly after retiring from the oil and gas industry in 2013, Tucker set off on a cross-country trek in an RV, towing another vehicle and a motorcycle. To ensure the safety of the configuration, Tucker would stop several times a day along the side of the road to check that all the wiring harnesses were connected and working properly.

During one such stop at night, with the hazard lights of the RV and towed vehicle blinking, a semi-truck clipped the side of Tucker’s towed vehicle while he was under it. Luckily, he wasn’t hurt.

But the accident left him shaken and looking for answers on how to prevent similar incidents in the future. As a result, he started experimenting with a flashlight that had a strobing function. Tucker found that this technique did a better job than hazard lights in getting the attention of other motorists, causing them to slow down from farther away and/or switch lanes.

Tucker quickly enlisted the help of Powers, a former co-worker who he had collaborated with on several other startup ventures, and other partners to refine the technology and develop a prototype for cars. They received the first of 46 global patents in 2014.

The basic concept is simple. Instead of operating at 1-2 Hz, which is the current legal limit for turn signals and hazard lights, ESS’ system increases the rate to 4-6 Hz and boosts light intensity by as much as 30%.

ESS is working with Virginia Tech, which is highly regarded for its human factors research program, to test and optimize the system.

The new software-enabled technology, dubbed H.E.L.P. (Hazard Enhanced Lighting Package), can be easily adapted to existing vehicle safety and lighting control systems, according to ESS. The only requirement is that all of a vehicle’s lights must be LED units driven by a body control module connected to the main CAN bus.

In addition, ESS says, the high-frequency lights could be turned on automatically following certain triggering events, such as airbag deployment, rapid loss of tire air pressure or a sudden engine cutoff. But Powers says use of the lights would be limited to when a vehicle is stationary to prevent confusion and distractions.

The ESS system synchronizes the blinking pattern of the headlights, taillights and turn signals. This helps distinguish a disabled car from an emergency vehicle, which uses an alternating pattern. In fact, Powers claims the synchronized pattern is more effective because it better outlines a vehicle’s position on the road.

The suggested light brightness is about 240 candelas to prevent blinding other motorists.

ESS submitted a design proposal to the U.S. National Highway Traffic Safety Administration about a year ago, incorporating tweaks the agency suggested to align with federal standards (FMVSS 108) for lighting systems.

There’s no timeline for an NHTSA decision. But the supplier is optimistic that H.E.L.P could be approved as soon as early 2021.

ESS also has development programs with several carmakers, which Powers notes could quickly add to future models pending regulatory approval. More recently, the supplier started working with regulators in Europe and other regions.

A demonstration vehicle (a specially equipped Tesla Model 3) is being tested by Virginia Tech. That program is expected to be completed next spring.

At the same time, the company continues to expand its patent portfolio. In addition to the basic technology, the various patents cover a wide range of lighting designs that Powers says will enable it to work across virtually every major make and model.

ESS also is working to increase public awareness about safety risks and is calling for new traffic laws on how other drivers respond to disabled vehicles. Many states require vehicles to change lanes or slow down when approaching a police car or ambulance on the side of the road, but the laws don’t apply to disabled vehicles.

Powers says the same safety measures should be applied to all vehicles, noting that non-emergency vehicles can be even more vulnerable because drivers and other occupants aren’t used to being in such situations.

On the public awareness front, NFL veteran Chris Smith has served as an unofficial spokesperson for the last year. Smith’s fiancee, Petara Cordero, was killed last year following an accident on their way to dinner.

Neither was injured in the initial crash. Cordero was struck by another car after exiting their vehicle to check on its condition. The hazard lights were on.

“These are preventable tragedies,” Powers says. “We need to do better, and we can.”