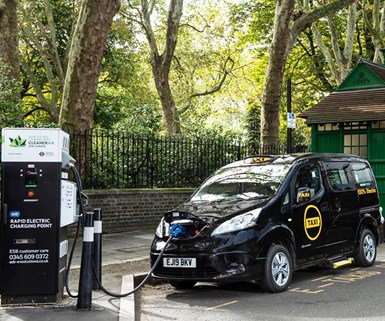 The vehicle, which is based on Nissan Motor Co.’s electric e-NV200 Evalia MPV, is said to be London’s first fully electric taxi since Queen Victoria’s reign 120 years ago. That vehicle, known as the Bersey Taxi, was sold only from 1987 to 1989.

Previous reports erroneously referred to London Taxi Co.’s TX5 model, which bowed two years ago, as an EV. But that vehicle employs a small gasoline engine as a generator, which makes it a series hybrid.

Dynamo buys the e-NV200 from Nissan, then modifies it to meet London’s strict taxi regulations. This includes a redesigned interior, wheelchair accessibility and a tighter turning radius. Dynamo also has added a large glass roof and an automated payment system.

The Dynamo Taxi’s electric motor generates 107 hp and 187 lb-ft of torque. A 40-kWh battery can power the vehicle for 187 miles, according to the supplier. The battery can be recharged to 80% capacity in about 50 minutes.