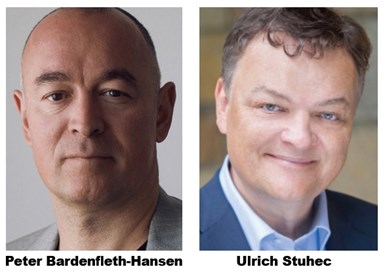 Peter Bardenfleth-Hansen, a former Tesla market development executive in Europe, is now chief growth officer. He is credited with developing Tesla sales in Japan, Norway and the Middle East.

Ulrich Stuhec, a former autonomous vehicle engineering executive at Ford, takes over as chief technology officer. He began his career as a production planning consultant at BMW and spent 25 years at Ford helping to develop conventional and autonomous vehicles for markets in Europe, Asia and the Americas. Stuhec succeeds Fabian Schmitt, who is being reassigned within the company.

StreetScooter grew out of an internal program at Deutsche Post DHL Group to build electric postal delivery vehicles for its own use. Driven by strong interest in the trucks by other fleet operators, StreetScooter opened a second factory last year and hiked its annual capacity to 20,000 vehicles.

Last month the company partnered with Chery Holdings to begin making as many as 100,000 light-duty electric delivery trucks per year in China by 2021.