Too Much of a Good Thing? Crossover segment becoming saturated
#Chrysler #Fiat #Ford 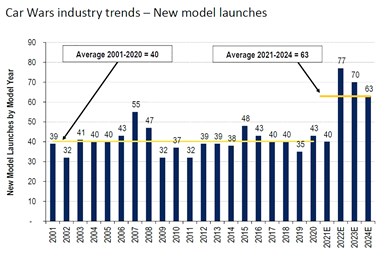 Carmakers plan to launch a glut of new models in coming years that could stymie profitability and slow the industry’s recovery from the coronavirus lockdown, according to the latest “Car Wars” study by Bank of America (BofA) Securities.

The rollout will include 250 vehicles between the 2001 and 2024 model years, which works out to an average of nearly 63 launches per year. That’s more than 50% greater than the average yearly rate of 40 since the early 2000s, according to the annual report, which was launched in 1991.

Crowding In on Crossovers

Nearly half of the new vehicles will be car-based crossover models. Another 28% will be traditional light trucks (SUVs and pickups), while the remaining 23% will come from cars.

The wave of new crossovers could hike the number of entrants in the already-crowded segment to as many as 152 vehicles by the 2024-model year. This could create hyper-competition in the market that drives pricing down and limits profits, warns John Murphy, the study’s lead author and senior analyst of BofA Resesarch. 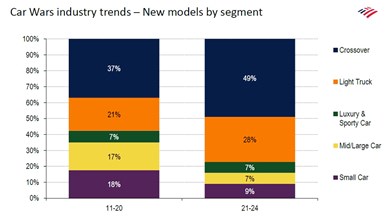 Murphy, who refers to the vehicles as “jacked-up station wagons,” claims that crossovers will soon become the “most crowded segment in history.” As a result, he says, the segment could quickly “fade and erode to where passenger car profits have been recently.”

Honda and Hyundai-Kia stand to benefit the most in the coming years with a host of new products in the pipeline. The companies have replacement rates of 91% and 90%, respectively, through 2024, compared with the industry average of 74%, according to the study.

Ford (83%) and Nissan (77%) also are above the replacement trend line. In particular, Murphy points to several new Ford models—such as the Bronco and Mustang Mach-E—as major growth and profitability opportunities into emerging segment.

Volkswagen, General Motors, Toyota and Fiat Chrysler rate below average in terms of replacement rates. FCA brought up the rear at 57%.

Bank of America expects a gradual recovery from the COVID-19-triggered recession. For 2020, the investment firm forecasts a 25% drop-off, with new vehicle sales sliding to about 12.8 million units from last year’s tally of 17.1 million vehicles.

Volume is projected to climb back to 14.5 million in 2021. But it likely will take several more years before topping 16 million units.

Other findings of the study include: