Nearly half of all car trips in large U.S. cities could be handled with scooters and bicycles, according to a new study by Inrix Inc.

Nearly half of all car trips in large U.S. cities are less than three miles and could be accomplished by scooter or bicycle, Inrix Inc. predicts. 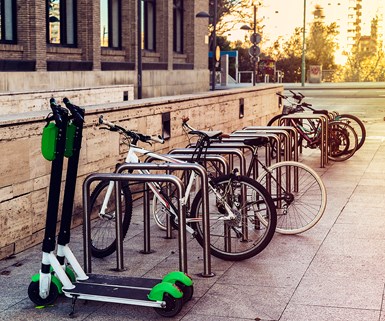 The report says 20% of all car trips in the most congested U.S. metropolitan areas are less than one mile. Another 16% of trips are between one and two miles long, and 12% are between two and three miles.

Currently, the most common use for scooters are for trips of less than a mile; bicycle rides typically are one to three miles long, according to the National Assn. of City Transportation Officials. The high proportion of such short-distance trips highlights the potential for shared scooters and bikes, Inrix says.

Honolulu has the highest rate (55%) of car trips under three miles among major U.S. cities. New Orleans is the next highest at 52%. Charlotte, Chicago, Nashville, New York and Portland all have 51% micromobility ratings. Pittsburgh, Los Angeles and San Francisco rounded out the top 10.

Inrix says the warm climates and relatively flat topographies of Honolulu, New Orleans and Nashville make them even more likely to switch to scooters and bicycles in the future. Similarly, usage of such devices in areas of Manhattan without as much access to the city’s subway system could expand, especially with vehicle congestion fees due to be implemented in coming years, Inrix says.

The report notes that some cities have scaled back their scooter and bike services after rapid expansions produced a glut of shared devices on city streets. San Diego, for example, capped the number of permitted scooters at 20,000 units—and implemented usage and storage regulations—when citywide deployed ballooned to twice that level.