It’s time to say goodbye to the Subaru BRZ sports coupe and its Toyota GT86 twin. 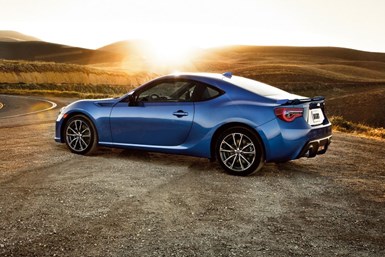 Subaru, which builds both models at its factory in Gunma, Japan, says it no longer is taking build orders for the BRZ.

But replacements for the rear-wheel-drive vehicles could arrive as soon as next summer as 2022 models. Only this time they’ll likely be built on a Toyota platform instead of continuing to use one from the smaller Japanese carmaker.

The so-called Toyobaru (or Subieyota?) coupes debuted with much fanfare in 2012, serving as low-priced (under $30,000) halo cars for the two brands.

Built on a heavily modified version of Subaru’s previous-generation all-wheel-drive architecture, the BRZ and GT86 (initially called the Scion FR-S in the U.S.) were praised for their styling and handling. But critics panned their cramped rear seats, tiny trunk and poorly designed touchscreen.

Sales in the U.S. peaked in 2013 for both vehicles at about 18,300 units for the GT86 and less than 8,600 for the BRZ, according Carsalesbase.com. Volume has fallen every year since, tallying less than 5,800 combined last year.

But the partners strengthened their relationship last September when Toyota increased its stake in Subaru to 20% from about 17% previously. At the time, the companies vowed to work together more closely and take on more joint development projects.

The move to Toyota’s New Global Architecture is necessary because it can support a rwd layout. Subaru’s new all-wheel-drive platform can’t.

Media reports also speculate that the new models will be powered by a turbocharged inline 4-cylinder engine from Toyota rather than a Subaru “boxer” four-banger. This could boost output to about 250 hp from 197 hp in the current BRZ and GT86 coupes.

New exterior styling and a significantly upgraded interior also are said to be on tap. It all sounds good on paper—and likely will look even better on the street.

The biggest question is whether the shrinking niche enthusiast market for sports coupes is big enough to make the cars worth the effort. Let’s hope so.