Subaru expects to derive at least 40% of its sales from hybrid and all-electric vehicles by 2030. Sometime after that—in the first half of the 2030s—the company says it will apply electrification technologies across its global lineup.

While that’s a considerable change from its current lineup, Subaru’s rollout still lags the electrification plans of many of its competitors.

The company has its reasons (more on those later) for the leisurely pace. But first, let’s talk about the EVs.

The new Subaru models will use technology supplied by Toyota, under the partnership the companies announced last summer. In September, Toyota increased its stake in the smaller Japanese company to 20%. 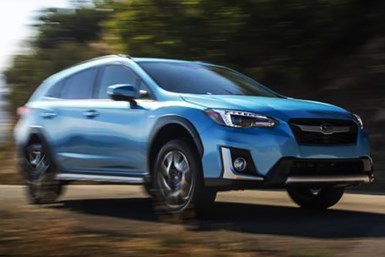 Subaru’s new cars will include an all-new electric crossover due in 2025. Subaru previewed the vehicle with a design study model that the company showed on Monday at a tech briefing in Japan.

In addition to the EV, Subaru plans to launch a “strong” hybrid model at about the same time.

The carmaker currently offers a few 48-volt mild-hybrid systems in Japan and Europe. A plug-in hybrid variant of the Crosstrek crossover, which also uses Toyota technology, was introduced last year in the U.S.

While relying on Toyota’s hybrid/EV technology, Subaru aims to put its own mark on the new vehicles rather than simply rebadging Toyota models.

This means doubling down on its strengths: awd, EyeSight driver-assist systems, performance features and the company’s signature horizontally opposed “boxer” engines. The latter will be teamed with Toyota’s dual-motor architecture in future hybrids.

These are the qualities that make a Subaru a Subaru. Such differentiation is especially important to the relatively small carmaker, which needs to look for ways to “enhance its uniqueness,” notes President Tomomi Nakamura.

"It's not only about reducing CO2 (carbon dioxide) emissions,” adds chief technology officer Tetsuo Onuki. “We need to further improve vehicle safety and the performance of our all-wheel drive."

Another reason Subaru isn’t more aggressive with electrification is the slow adoption rate in the U.S., which accounts for two-thirds of the company’s sales.

Selling EVs and plug-in hybrids is “really difficult,” Nakamura attests, pointing out that no company other than Tesla has had much success. High costs and lack of clear regulations also remain a concern.

Subaru’s approach may be more practical, but that isn’t stopping others from moving fulling speed ahead (check out Toyota, Volvo, VW and Hyundai’s electrification plans). Another sign of the times: General Motors is gearing up to relaunch Hummer as a “green” nameplate.