Subaru Inc. has sold its 10 millionth vehicle in the U.S. since launching sales in the country 51 years ago.
#Subaru

Subaru Inc. has sold its 10 millionth vehicle in the U.S. since launching sales in the country 51 years ago. 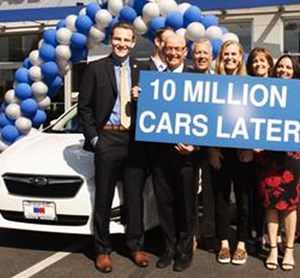 The milestone model, a white 2019 Impreza sedan, was delivered by a Utah dealership earlier this month. The outlet, which is located in Salt Lake City, is said to be the longest-running Subaru facility in the country.

Subaru America sold just 332 units of the much-maligned 360 micro car in 1968 and took 41 years to surpass the 5 million mark. The company achieved the next 5 million in about 10 years.

With a lineup of eight models, Subaru says its on pace to sell 700,000 vehicles in the U.S. this year.