One way to eliminate range anxiety associated with electric vehicles is to continuously recharge their batteries as they’re moving.

Sound too good to be true? Think again. A Swedish consortium recently tested such a system, using copper coils embedded in the road to wirelessly charge EVs driving over them. 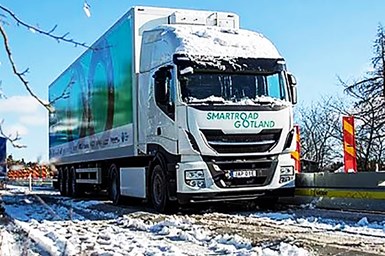 Initial tests were conducted with a specially equipped 40-ton long-haul electric truck on a small section of a highway on the island of Gotland in the middle of the Baltic Sea. The 10-day pilot program recently was completed—during snowy and icy winter conditions.

Funded by the Swedish Transport Administration, the Smartroad Gotland project is led by the Swedish subsidiary of Israel-based ElectReon Wireless. The electrified road, located between the town of Visby and a local airport, was built late last year.

The coil embedded in the center of the road taps into the electric grid via a smart inverter positioned along the roadside. Using induction charging, energy is transmitted to chassis-mounted receivers on passing trucks. The energy can be used to charge the battery or sent directly to an electric motor.

ElectReon says the system is 85% efficient. The technology also could enable the use of smaller and less expensive batteries, according to the company. In addition, excess energy generated could be sent back to the grid or used to enhance the charging of other passing EVs.

The first tests, which were conducted at speeds of about 20 mph over a 160-ft strip of the highway, sent 45 kW of energy to the truck’s battery.

Subsequent tests planned for later this year aim to gradually increase transfer power and vehicle speed. The goal for the system is to transfer 125 kW to vehicles travelIning at highway speeds, according to ElecReon.

Additional sections of the highway and airport roads also are being electrified. The latter will be used for an electric shuttle bus at the airport.

ElectReon, which was founded in 2013, also is testing a Renault Zoe EV at its facilities in Tel Aviv. But the company says the initial focus will be on trucks and buses that operate over fixed routes.