Uniti Sweden AB has updated its all-electric One city car, which is now due to launch by mid-2020 with a starting price of about $19,100.
#europe #HP 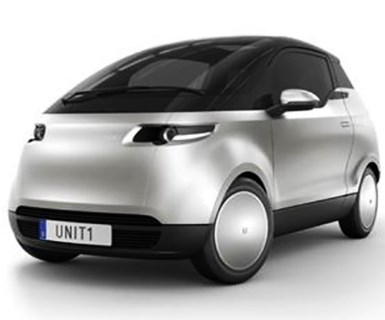 The production model (pictured) is slightly larger, more powerful and more expensive than the prototype unveiled in late 2017. Uniti originally aimed to launch the car this year at a price of €14,900 ($16,400).

Unlike the quadricycle prototype, the updated model is a passenger car that must meet more stringent safety requirements. Uniti says it’s in the process of conducting virtual crash tests.

Vehicle weight has been increased by one-third to 600 kg (1,320 lbs). The three-seater has a central driving position, flanked by two rear seats.

The electric motor generates 67 hp and 63 lb-ft of torque. Top speed is listed at 75 mph.

The car will be offered with a choice of 12-kWh or 24-kWh battery. The entry-level system will provide a 93-mile range, while the larger battery doubles that distance. It takes nine minutes and 17 minutes, respectively, to replenish the two batteries to 80% capacity with a 50-kW charger, according to Uniti.

The interior is highlighted by touchscreens on either side of the steering wheel and an electrochromic sunroof that automatically darkens to help cool the car when it’s parked. A smartphone app is used to unlock and start the vehicle without a key.

Uniti plans to build the cars via an automated process at small franchise facilities in markets in which they’re sold, starting with Sweden and the U.K. Other target countries include Australia, Dubai, India, Mexico and the U.S.

The company says it has received 3,000 orders (including a $160 deposit) for the car. Early buyers will be part of a beta testing program and will receive free software updates for the life of the vehicle.

Uniti also plans several other variants, including a 2+2 model.