Tag Along for a Ride in Mobileye’s Self-Driving Car

Ever wonder what it will be like to ride in a self-driving car? Or how such vehicles operate and make human-like decisions?

Now’s your chance to check it out for yourself. A new video from Mobileye demonstrates the company’s latest technology during a 40-minute drive through the streets of Jerusalem.

Lots of Obstacles, No Human Intervention 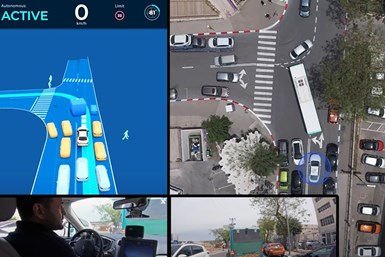 Some of the more challenging events included a hesitant pedestrian standing alongside the road, who decides not to cross to the other side, and another pedestrian walking in the center lane.

The only time the back-up driver took control of the vehicle was to pull it over to the side of the road so the batteries could be changed in the drone recording the video.

The demonstration vehicle was equipped with eight long-range cameras and four parking cameras. Data from the cameras was fed into two of Mobileye’s EyeQ5s system-on-a-chip processors.

Mobileye plans to team the camera system with a separate unit that uses lidar and radar. The two sensor suites work independently, rather than the so-called fused systems being developed by other companies, to provide redundancy.

Mobileye says the system’s processors assume worst-case scenarios of what other road users will do instead of predicting what will happen based on datasets of real-world behavior. As a result, the company claims, “the decision-making brain of the AV will never cause an accident.”

In addition to technical challenges, autonomous vehicles also need to overcome public concern and uncertainty about such systems.

Mobileye, which was purchased by Intel for $15.3 billion in 2017, already supplies advanced driver assistance systems to about 30 carmakers worldwide.

Last November, the Israel-based company announced a partnership with Chinese startup Nio to develop automated systems for use in the latter’s electric cars. The two companies intend to debut a first-generation system in robo-taxis in China in 2022.

Mobileye also plans to market a variant of the latter application to other carmakers worldwide.